Recently Fox News went apoplectic over a phony allegation that millions of Americans will be victimized by hackers if they try to enroll in a new health care plan. Then they fear mongered over the horror of Americans voting due to the Affordable Care Act website providing users with an opportunity to register. Then they trembled at the thought of ACORN zombies helping people to get health care coverage. And now they think they have uncovered an ominous threat lurking in the Healthcare.gov website.

And this is the Fox News mothership, not their rabidly dishonest Fox Nation community site. 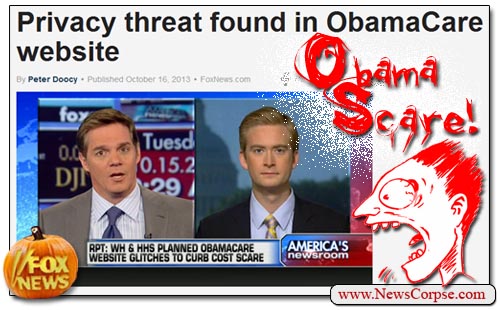 Fox News correspondent Peter Doocy (son of Fox & Friends Curvy Couch Potato, Steve Doocy) posted an article on the Fox News website that purported to have ferreted out what he called a “privacy threat” hidden in the ObamaCare source code. He wrote that “buried in that website’s blueprint (known as ‘source code’) lies an alarming warning.” He further stated, without any documentation, that unnamed security experts worry that “the U.S. government is ill-equipped to handle identity thieves.”

None of this was supported by any actual evidence. Mini-Doocy simply cited as his source a column on the ultra-conservative Weekly Standard website that said…

“Now comes another example of why the website’s reputation is in tatters. Buried in the source code of Healthcare.gov is this sentence that could prove embarrassing: ‘You have no reasonable expectation of privacy regarding any communication or data transiting or stored on this information system.’ Though not visible to users and obviously not intended as part of the terms and conditions, the language is nevertheless a part of the underlying code for the ‘Terms & Conditions’ page on the site.”

This is another situation where you have to wonder whether these people are embarrassingly stupid or brazenly dishonest. There is a reason that this language was not visible. It was deliberately removed with the use of HTML comment tags by the site’s programmers. It was undoubtedly edited out because it was not an accurate expression of the site’s privacy policy. It does not mean that users are agreeing to a secret clause permitting the government to spy on them as Fox News implied. If any of these “reporters” had a fourteen year old at home they could have learned what this is about.

In all likelihood, one of the programmers probably copied a block of text from a privacy policy somewhere else and then edited it by taking out the parts that don’t apply. The Weekly Standard even included this possibility in their article, but then downplayed it with their deliberately ambiguous assertion that “the language is nevertheless a part of the underlying code.” Not really. It’s only a part of some inoperative text that is not a part of the privacy policy and no one is bound by it. Fox News left out this explanation entirely. Their goal is to leave Americans with the false impression that some danger lurks beneath the surface of ObamaCare.

To make matters worse, Doocy’s article on the Fox News website was accompanied by a video that had nothing to with this source code matter. The video did feature Doocy reporting on Fox News an utterly asinine conspiracy theory that the White House and the Department of Health and Human Services “Planned Obamacare Website Glitches To Curb Cost Scare.”

The crux of this nonsense was Doocy’s assertion that the administration was afraid that citizens would be put off if they saw insurance premiums prior to being adjusted by available subsidies and tax credits. Of course they would. It’s like saying car buyers would be put off by the manufacturer’s sticker price before being told of the dealer’s actual discounted sale price. The administration wasn’t trying to hide anything. They were trying to make all of the relevant information available so the consumer could make an informed decision. But in FoxNewsLand this amounts to a conspiratorial plot by the government to hobble their own website despite the obvious negative fallout from doing so.

Once again, this is proof that Fox News is committed to frightening the American people to keep them from taking advantage of a program that will be of great benefit to them and the nation. Fox News knows that this program will be popular once the public is aware of it’s value. And Fox will do everything it can to keep that from happening – even inventing phony horror stories.