It’s only been a few hours since Republicans caved in and finally reopened the government and raised the debt ceiling, extracting none of the many demands they previously insisted upon. Every poll shows them at historic lows and election analysts are giving Democrats fair odds of taking back the House of Representatives.

And yet, some GOP politicians are already saying they intend to do it all again in the next couple of months and, this time, they are sure they will prevail because God told them so. 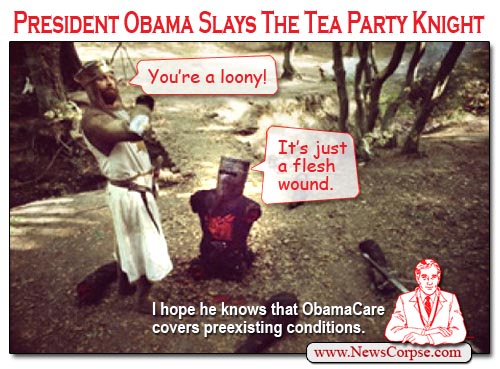 Now, in support of that blind confidence, Bill Kristol, the man who thought that Iraqis would welcome American troops as liberators; the brilliant electoral strategist who urged John McCain to choose Sarah Palin as his running mate and predicted that Obama wouldn’t win a single primary against Hillary Clinton; that Bill Kristol, who is the editor of the ultra-conservative Weekly Standard and a contributor on Fox News, has published an editorial that claims that Republicans won the shutdown debacle.

Kristol: Republican efforts over the last weeks have reminded the electorate that it is the Democrats who are the party of 1) the nightmare of Obamacare, 2) the burden of the ever-increasing public debt, and 3) the arrogance of Washington, D.C. Those reminders are worth a lot. So while the GOP has paid some price in the recent skirmishes, the greater price, I suspect, will end up being borne by Democrats.

There you have it. Americans will only remember a few of the hackneyed talking points that Republicans tried and failed to make central to the debate over the past three weeks. They won’t recall how the Tea-Publicans put the nation, and the world, at risk by threatening to default on our debt. Neither will they recall their absurd insistence that Obama undo his signature legislative achievement. Kristol thinks that the country will forget the circus atmosphere created by Ted Cruz and a handful of House Republican nitwits – not to mention the ineptness of GOP Speaker John Boehner.

Despite all of that, Kristol suspects that “the greater price will end up being borne by Democrats.” This is a troubling notion coming from one of the right’s most influential pundits. It suggests that the threat of another default and/or shutdown is still on the table.

On the other hand, it also suggests that Republicans are purposefully trying to return control of the House to Democrats. Perhaps they have recognized that they are unfit for leadership and are angling for a way to abdicate without losing face. That’s the only plausible explanation for why they would entertain any notion that there was a victory for them in any of this. It ‘s the only way Kristol could say with a straight face that…

“Now, with the skirmishing over and a tactical retreat accomplished, the GOP has a chance to regroup and rethink, so as to be better prepared for the next encounter in the new year.”

So he’s calling this embarrassing defeat a “tactical retreat.” Isn’t that cute? And didn’t they just complete a rethinking after they lost last year’s presidential election? Reince Priebus, the chairman of the Republican National Committee, published an extensive “autopsy” of the botched campaign wherein they lost the White House as well as two senate seats and nine seats in the House. And apparently they still haven’t learned anything.

And to top off the superb comedy of this column, Kristol built it all around an analogy based of the travails on the Weekly Standard’s Europe 2013 Cruise, which apparently ran into some bad weather and was unable to make shore as scheduled. So he is comparing the GOP to a floundering cruise ship and concluding that they won a proud victory.

Um…OK. It think it’s best, at this point, if we just humor them.