What do you get when you combine the cable TV “news” network most associated with blatant partisanship and dishonesty, with a member of Congress best known for a criminal past and a record of investigating phony scandals? You get the Fox News/Darrell Issa Sappy-Talk Disinformation Show. 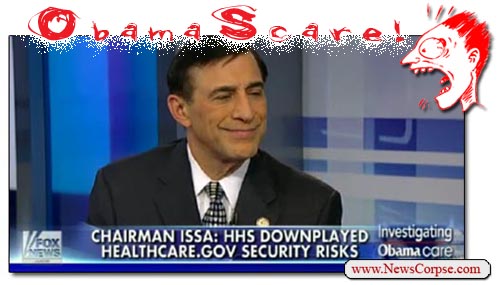 Earlier this week Issa made one of his frequent appearances on Fox News to bash President Obama and the Democratic Party. On this episode he was peddling an allegation that the ObamaCare website posed a security risk for Americans who visit it. It’s a claim that both Issa and Fox have attempted to hustle many times before. And like on those other occasions, they had no evidence to back up the charge. But that didn’t stop them from spreading their lies on the air. And while they were at it, they also spread them online at their community website and lie factory, Fox Nation, where they cited as their source an article in Roll Call that exposed the falsehoods in their own story.

Issa based his accusations on testimony that took place at a hearing he chaired in the House of Representatives. His modus operandi in these events is to selectively release just the parts of the hearing transcripts that make Democrats look bad. When the full transcripts eventually become available they prove that Issa was lying and deliberately misrepresenting what took place.

This event is no exception. Issa’s unscrupulous disclosures falsely implied that there were known security risks in the ObamaCare website that Health and Human Services officials ignored prior to going live in October. The snippet of testimony released by Issa included what appeared to be warnings by an HHS security analyst against approving the website’s launch. Had that been the whole story, Issa might have had a case. However, the parts of the record that Issa withheld revealed that the same security analyst reversed her assessment seven days later after steps were taken to address the problems she cited.

This is typical of Issa’s unethical promulgation of information that is deceitfully edited in order to advance a false narrative. And that is precisely how the Democratic ranking member of the committee described it when responding to Issa’s fraudulent tactics:

Rep Elijah Cummings: Chairman Issa’s reckless pattern of leaking partial and misleading information is now legendary for omitting key information that directly contradicts his political narrative. This effort to leak cherry-picked information is part of a deliberate campaign to scare the American people and deny them the quality affordable health insurance to which they are entitled under the law.

In addition to the mitigating testimony that Issa withheld, he also failed to report that his witnesses stated that “there have been no successful attempts of any of these types of attacks … no successful breaches [or] security incidents.” That’s after three months of operation in circumstances that have been notably less than optimal. So despite the problems that plagued the website’s rollout, while millions of Target customers were victimized by criminal hackers, there were no victims of any improper access by anyone using the ObamaCare website.

Notwithstanding the facts, Fox News and Darrell Issa bent over backwards to misinform their audience and spread fear about the program that is bringing access to health insurance to millions of Americans for the first time. Fox and Issa apparently prefer it when people are either prevented from getting the health care they require, or are bankrupted by the costs. And they are a perfect pair for propagandizing and fear mongering. In fact, just last week Issa held a hearing wherein he made a laughably ludicrous response to a health care official, saying that “You need to watch more Fox, I’m afraid.” Well, at least he’s right about being afraid. Fear is the primary ingredient of everything that Fox and the GOP combine to afflict upon the American people.