From nearly the beginning of Barack Obama’s first campaign for the presidency, he had advocated shutting down the Constitutional cesspool that is Guantanamo Bay. The very concept of it violates legal principles that have been part of the American ethic for decades. Plus , Obama’s predecessor, George W. Bush, and his 2008 Republican opponent, John McCain, had the the audacity to completely agree with him.

However, the goal of closing the prison camp has been stymied by Republicans in congress who invoke irrational fears of terrorists moving into the house next door to yours. Enter Fox News, who predictably pile on to advance the theory that Obama is providing aid and comfort to the enemy. The Fox Nation website is doing its part by posting an article with the sensationalized headline, “Obama Parole Board Frees Al Qaeda Terrorist Deemed ‘Too Dangerous To Be Released.” 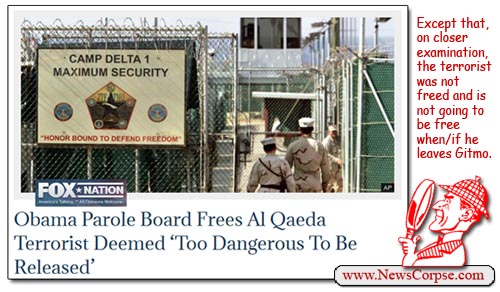 See Fox Nation vs. Reality for over 50 more documented examples of Fox lies.
Available at Amazon

The first, and most obvious, problem with this is that the terrorist in question has not been been freed as the headline says. There has simply been a determination that he is eligible to be transferred from Gitmo to Yemen, his nation of origin, but only after sufficient security arrangements have been settled. That means that if he is released, it will be into the custody of Yemen’s prison system.

Furthermore, the Fox Nationalists linked to an article by the right-wing legal hacks at Judicial Watch, where they spent most of their time spinning a tale of a different former Gitmo detainee, Sufian bin Qumu, who is alleged to have “participated in the 2012 Benghazi terrorist attack on the U.S. mission in Libya.” What Judicial Watch doesn’t disclose is that Qumu was released in October of 2007 by George Bush to Libya’s Muammar Gaddafi. Gaddafi later released him in an amnesty for political prisoners.

Of course, it is not possible for the U.S. to anticipate every future action by a foreign government and, to some extent, Obama has to rely on the assurances of Yemen that they intend to keep their prisoners locked up. But Fox News is quick to smear Obama as aiding and abetting terrorists for something that has not even taken place yet, while at the same time remaining silent about Bush, when both were executing the same policy. Fair and balanced my ass.

One thought on “Fox Nation vs. Reality: The Obama Terrorist Amnesty Myth”