Democratic gubernatorial candidate Wendy Davis must be terrifying to Texas Republicans. Why else would they be resorting to some of the most asinine tactics and ludicrous lies in order to defeat her?

In recent days Davis has been attacked by Republican opponents and the conservative press for a variety of manufactured pseudo-scandals. Among them is a claim dug out of a profile of Davis that appeared in the Dallas Morning News. Apparently her official bio said that she was a teenage single mother who struggled to make a better life for her family through hard work and education, eventually graduating from Harvard Law School. The newspaper noted, however, that Davis was not divorced until she was twenty-one years old and thus not a teenager when she became a single mother. Wingnut media immediately jumped on that discrepancy and howled with outrage that Davis was a liar who fabricated her life history.

Setting aside the fact that the difference between nineteen and twenty-one has no relevant bearing on anything, Davis’ critics also ignore the possibility that she and her husband were separated and living apart for a couple of years prior to their divorce being finalized. This is the sort of trivialities that Texas Republicans find it necessary to distort and exploit in order to smear their foes.

Another example of the GOP’s desperation was displayed in Rupert Murdoch’s New York Post where a headline declared that “Wendy Davis has no future in politics.” The article’s author came to this conclusion after learning that Davis’ second husband was granted custody of their children when that marriage ended. 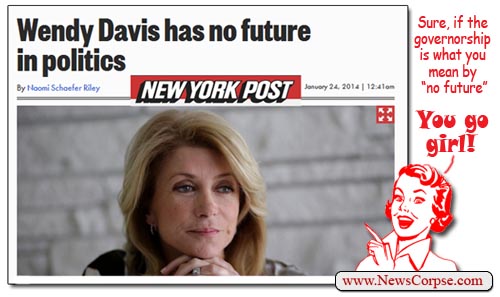 The Post falsely wrote that Davis had “lost custody of her children to her ex-husband.” The truth is that Davis agreed to the custody arrangement for the benefit of the kids to minimize any disruption to their lives. What’s more, the media’s characterization of this made Davis out to be an uncaring mother who abandoned her suffering little babies. For the record, her daughters were 23 and 17 at the time. And they apparently were not scarred for life because they are currently working on her campaign for governor and have appeared in commercials supporting her (video below).

[Update: Davis’ daughters are speaking out against the lies, negativity, and hatred that has been directed at their family.]

One of the most ridiculous assaults on Davis came when she was responding to these phony attacks on her character. She released a statement saying…

“I am proud of where I came from and I am proud of what I’ve been able to achieve through hard work and perseverance. And I guarantee you that anyone who tries to say otherwise hasn’t walked a day in my shoes”

Unbelievably, the right-wing outrage machine fired up a charge that Davis was mocking her prospective opponent for governor, Texas Attorney General Greg Abbott, for the disability that put him in a wheel chair. It seems that old cliches about experiencing things from the perspective of others are too harsh for the tender sensitivities of the American Wingnut. No one with a functioning brain could interpret Davis’ comment as a slap at Abbot’s disability. Thus it says something about Abbott that he ran (well, he didn’t actually run) to Fox News where he whined about how wrong it is to belittle someone for their handicaps. Of course, not only did she not do that, she didn’t even refer to Abbott in her remarks.

Is this really all they have? Has the Republican Party of Texas exhausted every other means of communicating with their constituents? In Texas, of all places, you would think they would have a stronger case to make for their conservative brand of politics. If they will sink this low in Texas in order to defeat a liberal Democratic candidate, they are clearly frightened in a major way. They must be aware on some level that they are a dying breed. They have alienated so much of their base that they are finding it difficult to succeed in territories they used to take for granted. And with the demographic shifts taking place in Texas, and the rest of the South, there isn’t much that they can take for granted anymore. And that’s why we’re seeing this sort of desperation play out in a state where not many expected there to be much of a contest.

Good luck, Wendy. You clearly have them on run.

9 thoughts on “Shaking In Their Boots: The Texas GOP Is Scared Witless Of Wendy Davis”