This weekend Fox News ran their regular commentary by reporter Liz Trotta. For those unfamiliar with Trotta’s work, she gained a certain measure of infamy when she joked that President Obama should be “knocked off” along with Osama Bin Laden. On another occasion she criticized women in the military for complaining that they are “being raped too much.” Trotta never defined what an acceptable amount of rape would be, just that these soldiers should expect it. 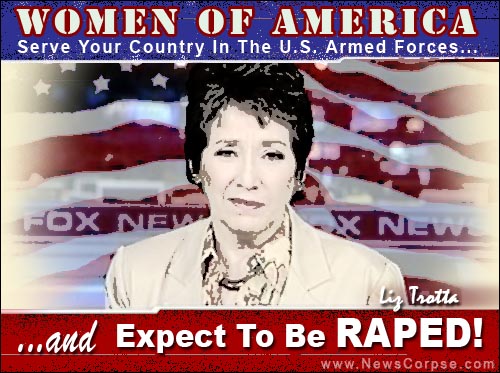 On the scale of loathsome miscreants, Trotta has set a pretty high bar for herself, but her newest commentary may have succeeded in surpassing all previous efforts. She has managed to squeeze derogatory references to women, men, liberals, African-Americans, gays, teenagers, and Puerto Ricans – all into one grotesque editorial retch. Trotta began by disparaging women as unfit to serve certain roles in government:

“Is there a lesson in the fact the the President, clinging to his diversity mantra, has appointed mostly women to top security and state department jobs? America the exceptional has become America the incompetent.”

Apparently the lesson is that women are incompetent. It’s funny that Trotta never bothered to express this opinion when George W. Bush appointed a women as National Security Adviser and Secretary of State. But then Obama has always had to live by a separate set of standards according to these right-wing hypocrites. Next, Trotta unleashed a barrage of things about which she has grown tired, including…

“…tired of the random rudeness and coarse language on and off the street, especially from oversexed teenagers who advertise their sex and then claim abuse.”

Indeed. Those irresponsible teenagers flaunting their nubile sexuality are just asking for it. They have no right to complain when they are subsequently abused by perverts who can hardly be expected to resist such temptation.

“…tired of weaselly young men with their testosterone challenged beards and mincing ways who would rather do the dishes than defend our country.”

We’ve all seen them, haven’t we? Those young bearded men bellying up to sinks, cleaning dishes, are everywhere. Meanwhile, the quarter million men in the armed services are hardly ever spotted on city streets. They probably have some lame excuse like they’re fighting terrorists in Afghanistan, or they’re stationed in army bases, or some such nonsense.

“…tired of racial imperatives. Hollywood’s robotic devotion to groveling liberalism by requiring every picture to showcase the liberated ingenue as assertive heroine and a cerebral black man as its sensitive anti-hero.”

Exactly!. The last thing we need is Hollywood casting women as positive role models, rather than the dutiful housewives or hookers-with-a-heart that God meant for them to portray. And as for black men, what ever happened to the days when they were rightfully confined to roles as gang-bangers, drug dealers, and dancing slaves? Who ever heard of a cerebral, sensitive black man anyway?

“…tired of the deification of homosexuals who may have won the media race and silenced the incompetent opposition, although many Americans find their lifestyle repugnant.”

It’s good to see that the struggle for civil rights has been reduced to a media race. And the fact that many Americans are repulsed by gays is justification enough for oppressing them, just as it was with African-Americans before they got uppity.

Liz Trotta is obviously bursting at the seams with animus for a wide variety (and a clear majority) of Americans. She even went after Puerto Ricans (who are American citizens) asking “When was the last time you saw an American flag at a Puerto Rican Day Parade?” Well, it took me about two minutes to find this photograph from a parade in Chicago last year.

Trotta is just another in the long line of pseudo-patriots who spew an unending litany of hatred for their country. She ended her rant with a generalized insult directed at the nation as a whole saying “America, the incompetent, rules.” We should be grateful for Trotta and her enablers at Fox. They let us know precisely how they feel about America. It’s too bad their viewers are too addle-brained to recognize that the network they worship hates them and their country.

15 thoughts on “Is This The Most Hateful Fox News Commentary Ever?”