When it comes to making up fake stories in order to advance a partisan, right-wing agenda, nobody does it quite as well or as often as Fox News. Generally it involves deceptively spinning some event or purposefully mischaracterizing the comments of a Democrat. But frequently they will manufacture a phony story from scratch, and that may be what happened with this one by Fox News reporter Todd Starnes. 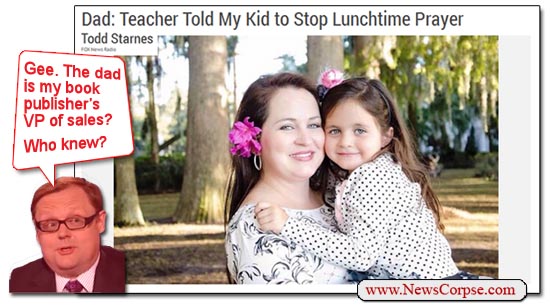 For more shameless lies from Fox…
Get Fox Nation vs. Reality. Available now at Amazon.

Starnes is perhaps the Fox figure who is most fixated on the perceived persecution of Christians in America. He has produced story after story on the same subject with alleged examples of innocent believers being harassed, oppressed, or maligned. However, many of his yarns turn out to be fables that are proven to be false when examined in full.

This week Starnes reported on a five year old girl whose father claims she was prohibited from praying in her school’s cafeteria. No one else can corroborate the charge. The school administration investigated and found no evidence to back up the claim. And there is no policy at the school that would prohibit a student from praying at lunchtime. This how Starnes began his story:

“A Florida school district is giving teachers a refresher course on religious liberty after the parents of a five-year-old kindergarten student said a teacher told their daughter that she was not allowed to pray before eating her lunch time meal.

“Marcos Perez, of Oviedo, Fla., said the incident occurred earlier this month in the lunch room at Carillon Elementary School.”

However, Starnes left out a pretty significant bit of information regarding his personal relationship with the family in the story. The Orlando Sentinel reported that Marcos Perez, the father of the girl, is also the Vice-President of Sales for Charisma House, a Christian book publisher that just happens to be publishing Starnes’ own book about – guess what – discrimination against Christians: “God Less America: Real Stories From the Front Lines of the Attack on Traditional Values.” That is a fact that Starnes failed to disclose in his story. [Note: After this association was revealed by the Sentinel, Starnes edited his column to add his relationship with the girl’s father] It can hardly be seen as an inadvertent omission when Starnes’ story includes quotes from a man he surely knows without revealing that fact.

So to recap: Starnes has a book coming out soon that describes alleged episodes of discrimination against hapless Christians. A Christian schoolgirl is allegedly forbidden from praying in a story that could have come right out of Starnes’ book. And the beleaguered child is the daughter of the man responsible for selling the book and coming up with attention-getting marketing schemes. But I’m sure it is all just a harmless coincidence.

2 thoughts on “Fox News Reporter And His Publisher In Bogus Book Marketing Scheme?”