The recent decision by the Supreme Court to permit unlimited contributions to political candidates and committees represents a further degradation of democracy as an experiment in self-rule. Along with the Citizen’s United case, this ruling puts more power into the hands of an elite minority of wealthy plutocrats whose only interest is in feathering their own already luxurious nests.

The decision impacts about five hundred people whose political contributions have reached the previous limits. That leaves the rest of the 350 million Americans who don’t have private fortunes to struggle for recognition from politicians who feast off of money. It is incomprehensible that five legally trained justices can plausibly deny the fact that big donors are able to extract favors from congressmen and senators, and that such favoritism corrupts the electoral system.

The reasoning articulated by Chief Justice John Roberts, who wrote the decision, defies logic. It is evidence that he and his conservative comrades on the Court were more interested in producing a desired result than in interpreting the Constitution. Here is the key argument presented by Roberts:

“Money in politics may at times seem repugnant to some, but so too does much of what the First Amendment vigorously protects. If the First Amendment protects flag burning, funeral protests and Nazi parades – despite the profound offense such spectacles cause – it surely protects political campaign speech despite popular opinion.” 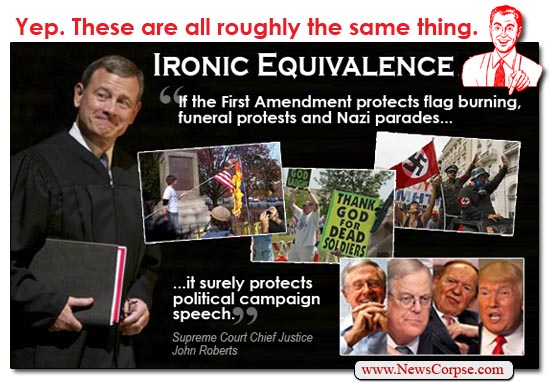 The problem with this argument is that it confuses the content of political speech with the manner of it. Everyone would agree that content, regardless of its popularity or lack thereof, is protected speech. But this case had nothing whatsoever to do with content. The plaintiff was contesting campaign laws that put limits on the amount of aggregate contributions any individual may make to candidates and/or political action committees. These laws were intended to prevent the sort of manipulation and influence peddling that existed prior to their enactment. The laws in no way prohibit free expression and the plaintiff never alleged that they did so.

The manner, or process, in which speech is made, however, is constitutionally subject to regulation. Everybody knows the legally justified consequences of shouting “fire” in a crowded theater when there is no fire. In addition, you cannot slander or libel someone; you cannot claim that your pomegranate smoothie cures liver cancer; you cannot spray-paint your message onto a citizen waiting for a bus; you cannot hack the satellite feed of a television network and broadcast your speech instead of American Idol; and, until this week, you could not spend unlimited sums of money to buy an election and a candidate or candidates.

The statement above by Chief Justice Roberts illustrates the faulty logic of content vs. process. Flag burning is an example of the content of speech. But contribution limits are an example of process. The process can be regulated without ever affecting any content, opinion, or exercise of free expression. Not being able to continue making donations after you have reached a proscribed limit does not prohibit you from continuing to speak. Put up a billboard. Publish an editorial. Call into the Rush Limbaugh radio show. Buy yourself a half hour of primetime television. Your rights are obviously still in effect. But it is perfectly reasonable for legislatures to enact contribution limits that protect the democratic process from being co-opted by wealthy special interests.

The right to donate unlimited sums of cash to a candidate exists nowhere in the Constitution. This court has invented a right on the shaky premise that it is tied to free speech. However, if I can’t stand in front of Donald Trump’s mansion with a bullhorn day and night, I still have other means of expressing myself. The same is true for the Koch brothers if they are not allowed to pour unlimited funds into the bank account of GOP hack who will do their bidding.

However, the irony of Roberts invoking free speech in his decision delivers a rather appropriate juxtaposition of ideas. By trying to conflate process with content, Roberts produced an example that puts extravagant campaign spending in the same category as repugnant behavior like flag burning, funeral protests, and Nazi parades. On that measure, I’m gonna have to agree with him.