Always on the lookout for ways to help the Republican Party, Fox News published an editorial by Maggie Gallagher, a founder of the anti-marriage equality group, National Organization for Marriage, entitled “Hey, GOP, want to win in 2016? Fix fundamental flaw in Republican brand.” 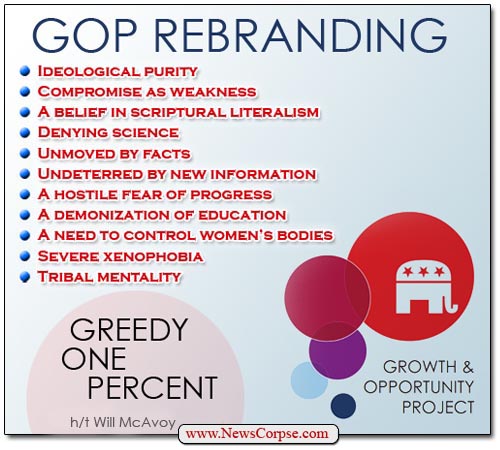 Indeed, the Republican brand has suffered of late with even the Chairman of the Republican National Committee, Reince Priebus, conceding that the problem is so serious it required an “autopsy” following the 2012 election to address the party’s tendency to drive away critical constituencies. The RNC’s “Growth and Opportunity” report identified several areas of concern that included poor outreach to minority voters, alienating the youth demo, and too many candidate debates (an admission that the more people see their candidates, the less they like them).

Now Fox News is weighing in with an opinion as to what the “fundamental” flaw holding back the GOP is. The article begins with a premise with which it is difficult to disagree:

Setting aside the curious assertion that “mild inflation” contributes to a “deadly” situation, Gallagher’s recognition that stagnant wages lead to a decline in the living standard of middle class working families is spot on – and something that Democrats have been focused on intensely. Republicans, in the meantime, have been staunch opponents of raising the minimum wage; they have drafted legislation to eliminate overtime pay; they support corporate policies that encourage sending American jobs to other countries; and they favor mergers that result in massive layoffs.

The Democratic agenda is squarely aimed at improving the economic status of America’s middle class, while the Republicans drive headlong into crushing it in favor of the wealthy business elites whom the right mistakenly regard as job creators. [This graphic illustrates who the Real Job Creators are] While Gallagher acknowledges that GOP rhetoric is overly focused on the needs of voters’ bosses, she also dismisses the notion of raising the minimum wage as “feeble.” So what is Gallagher talking about when she refers to the fundamental flaw in the Republican brand?

“One obvious place Republicans could show they “get it” is relentlessly focusing on the pay cut ObamaCare means for many middle class working families.”

Of course! It’s ObamaCare. The cause of the entire world’s descent into a dystopic cataclysm that threatens to devour liberty and thrust the planet into eternal depression and tyranny. Never mind that ObamaCare is actually reducing the financial burdens that have plagued middle class families who have suffered either exorbitant and ever-increasing insurance premiums, or worse, devastating medical bills that drive them into bankruptcy. With ObamaCare the middle class no longer needs to worry about being denied coverage or having their policy canceled should they have the audacity to file a claim. Nor do they need to remain shackled to a low-paying and unfulfilling job just to stay insured.

Gallagher’s retreat to ObamaCare as the universal thorn in whatever right-wingers are complaining about at the moment is absurd in the extreme. But her contention that this is the fundamental flaw that the Republican Party needs to fix makes even less sense. Where has she been the last four years? Undoing ObamaCare has been the single most prominent obsession of the GOP since it was introduced. If she thinks that the Republican brand is suffering because they haven’t done enough to oppose ObamaCare, she may need to take advantage of the mental health care benefits the new law has made possible.

Finally, Fox News frequently does stories about how the GOP can improve their electoral prospects. However, they never do stories with similar advice for Democrats. That may not be particularly fair and balanced, but judging by the advice that Fox is giving to the GOP, perhaps the best thing they can do for Democrats is to keep giving advice to Republicans.