On today’s Glenn Beck show, a guest was stricken and, after warning Beck three times that he was about to pass out, he fell to the ground. The alert director made sure to take a wide camera shot so that the audience could see the poor man prostrate on the studio floor. David Buckner, professor of organizational leadership at Columbia University, was discussing the economy with Beck when he wobbled and fell.

Shortly after the incident, Beck announced that Buckner was OK. But, not one to waste a catastrophe, Beck made a point of cheerfully describing how this was a good thing for his show:

“Everybody thought it was part of the show because this show, you never know what to expect. [Buckner] apologizes, and I’m like ‘are you kidding me, the ratings will be through the roof!'”

How thoughtful. It appears Beck has gone the full Howard Beale. Either that, or this is a preview of his just announced Comedy Tour: 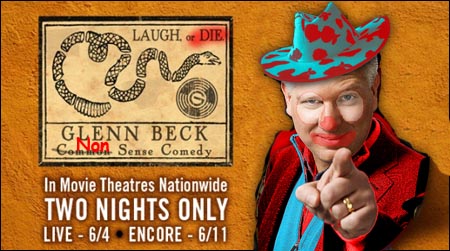 This makes perfect sense. What’s funnier than a guy who goes on TV everyday crying like a baby about the impending end of western civilization? He’s a natural. Here’s a sample joke from Beck’s show:

A priest, a minister and a rabbi go into a bar – and they are all killed by Soros-backed ACORN protesters bused in from FEMA camps where they were re-educated by the mainstream media to worship Obama and Islam.