The pseudo-patriots at Fox News have made it a staple of their programming to accuse President Obama of being a lawless president. This is usually in response to something that is perfectly legal like the issuance of an executive order (of which Obama has produced fewer than any two-term president in at least one hundred years). But when it comes to bona fide lawbreakers, Fox is fully supportive, so long as it can be used against Obama or the administration he leads. 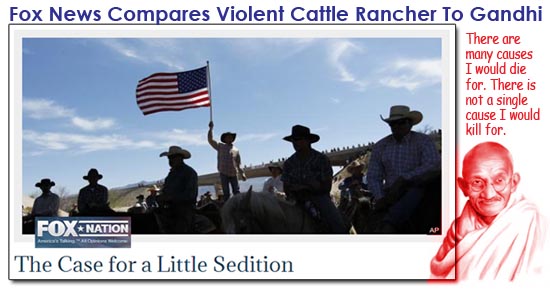 For more of Fox’s repulsiveness…
Get Fox Nation vs. Reality. Available now at Amazon.

Cliven Bundy is cattle rancher in Nevada who doesn’t recognize the federal government’s authority to manage the land that it owns. So rather than pay customary grazing fees for his cattle, like all other ranchers do, he has defied the law and exploited public lands for his own private financial benefit. In the process he has threatened violence against law enforcement personnel and implied a readiness to engage in hostile activities that would put innocent members of the public in danger.

If a Republican were currently serving as president, Fox News would surely denounce Bundy as an outlaw who was stealing from the American people. That’s if they bothered to report on it at all. In fact, a similar case involving the Colvin Cattle Company of Nevada was resolved in federal court in 2006, during the Bush administration, with a judgement in favor of the Bureau of Land Management. There was no wailing about big government or tyranny. There was no outcry from Republicans, militias, or Fox News.

However, since the government that Bundy is defying is run by a Democratic chief executive (and a black one at that), Fox News has elevated Bundy to hero status. They broadcast frequent remotes from the Nevada desert with fawning interviews of the Bundy clan. They completely ignore his threats to public safety. Sean Hannity even lauds their efforts and has promised to join them on the battle lines (yeah, sure he will). They also misrepresent the nature of the dispute as one that involves environmental issues rather than the failure to pay grazing fees as the law requires.

Now Fox News has crossed a line in their reporting that suggests that they are in favor of violent insurrection. On their Fox Nation website they have featured an article sourced to National Review with the title “The Case for a Little Sedition.” Apparently Fox News is comfortable with advocating treason in small amounts. But the twisted reasoning they use is both absurd and offensive:

“Mohandas Gandhi and George Washington both were British subjects who believed that their legal situation was at odds with something deeper and more meaningful, and that the British were a legal authority but an alien power.”

What makes this article especially reprehensible is that it seeks to compare Bundy with Gandhi. To be clear, Gandhi was a man who sacrificed his life for the benefit of his people so that they could be free of a foreign oppressor. And Gandhi was committed to achieving that goal with non-violence. Bundy, on the other hand, is a man who has openly expressed his intention to cause violence against his fellow Americans in pursuit of his private financial self-interest. See? They are exactly the same.

Likewise, the comparison to George Washington is unfathomably ludicrous. Washington led a revolutionary army aimed at untethering the British colonies from a monarchy that ruled them while neglecting their interests. But Bundy is leading a personal criminal enterprise in order to enrich himself at the expense of the nation.

For Fox News to support this criminal behavior is unconscionable and grossly inappropriate for an alleged journalistic organization. Any hostilities that may ensue as a result can be directly attributable to Fox News and their affiliated wingnut media like National Review. Should violence breakout the victims would have legal standing to pursue Fox News criminally and civilly.

Fox’s viewers also have a responsibility related to this. If they continue watch and support a network that has openly called for sedition against the government, then they bear a symbolic culpability as well. And they certainly cannot portray themselves as patriots going forward.