On CNN’s Reliable Sources this weekend, host Brian Stelter interviewed David Brock, the founder of Media Matters, to respond to an accusation made by disgraced former CBS reporter Sharyl Attkisson on last week’s program. Attkisson alleged that Media Matters might have been paid to target her for criticism. It was an irresponsible and paranoid allegation for which she offered no evidence or any details on who would have offered the payment or to whom. In effect, Attkisson demonstrated why her reporting is regarded as hackery.

In the segment on Reliable Sources (video below), Brock was asked about the nature of his business and his relationship with other media enterprises. He candidly replied that “We do work with reporters. We’re a media watchdog group.” That seems pretty obvious. It is precisely what media watchdogs are designed to do. They monitor various journalism outlets, analyze their content, and communicate their findings to the public and other members of the press. It’s a valuable service that helps to keep the media honest and accurate. But that’s not the way Fox News sees it. 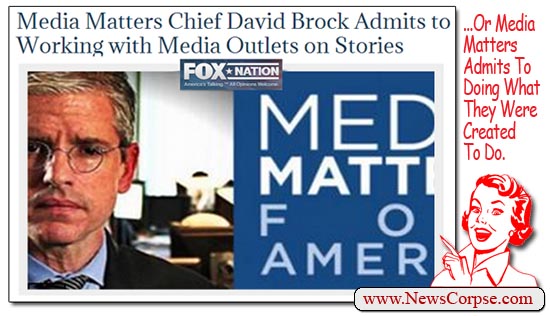 In a desperate attempt to further smear an organization with which Fox is obsessed, Fox News posted an article on their Fox Nation website with the shocking disclosure that Brock “Admits to Working with Media Outlets on Stories.” That’s more of a definition than an admission. It’s perfectly acceptable for Brock to provide his reports to the media, just as it’s acceptable for the media to receive and evaluate them.

Nevertheless, the Fox Nationalists portrayed this activity as if it were criminal, saying that he “did not deny the allegations today.” Again, that’s more of a job description than an allegation. And it’s a job that is done by many organizations including some with conservative views. One of the most notable is the Media Research Center and its NewsBusters website. Run by ultra-rightist Brent Bozell, the MRC is a major source of information for the conservative media circus including Fox News. Former Fox anchor Brit Hume even lauded the MRC saying…

Given the close relationship between the MRC and Fox News, it is blatantly hypocritical for them to assert some sort of malfeasance on the part of Media Matters. When Fox’s primary anchor and managing editor confesses to making “tremendous use” of the MRC’s data, and not knowing what he would have done without them, it seems somewhat overblown and self-serving to criticize Media Matters for simply documenting the flagrant bias and inept inaccuracies of the conservative media.

It would not be too much of a stretch to observe the jealousy of the right who have a much harder time fabricating their fake outrages and phony controversies like the one presented here. Whereas Media Matters, sadly, has an abundance of right-wing distortions and lies to catalog. Brock may have said it best on Reliable Sources when he noted that conservative watchdogs…

“…seem to be particularly incensed about Media Matters’ relationship with the media. Maybe we’re just doing a better job than they are.”