For much of the past year Fox News has devoted huge chunks of airtime to a phony scandal alleging that the IRS improperly targeted Tea Party groups for extra scrutiny with regard to their applications for tax-exempt status. In fact, recent discoveries prove that progressive groups actually received an even greater amount of scrutiny. But for Fox News to then turn around and solicit scrutiny from the IRS in order to strip tax-exempt status from Media Matters, an organization that Fox viscerally hates, is more than a little hypocritical and unethical. 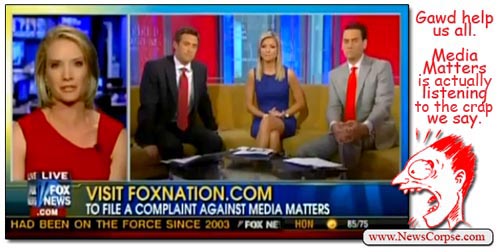 For more rank dishonesty from Fox…
Get Fox Nation vs. Reality. Available now at Amazon.

Nearly three years ago, News Corpse documented the obsession Fox News has had with Media Matters and the well orchestrated campaign to destroy them. Fox spent countless hours across multiple programs lambasting Media Matters and its founder David Brock. They alleged that Brock was insane, and a drug addict, and dishonest, and corrupt, and not very nice either. During that offensive, Fox News tried desperately to get the IRS to revoke Media Matters’ tax-exempt status, even enlisting their viewers into a campaign to file false complaints with the agency. Fox anchor Steve Doocy made several announcements on his morning show Fox & Friends like this one:

“Somebody has set up a web site and we have linked it, actually, at FoxNation.com. If you go down about half way down you’ll see that logo. If you want to file a complaint with the IRS against Media Matters because you feel they have gone political, they have abandoned their initial quest, then go to that site and go ahead.”

Now Fox is reviving that campaign with a new thrust at their perceived enemies at Media Matters. Once again Steve Doocy took to the airwaves to ask if it is “Time To Revoke Media Matters’ Tax-Exempt Status?” During the course of this segment Doocy interviewed Fox contributor, and bitter subject of Media Matters ciriticisms, Juan Williams. Both of them blasted Media Matters for having the audacity to actually document what they say. And both were incredulous that Media Matters managed to maintain their tax-exempt status despite the best efforts of sabotage executed by Fox. Doocy summarized his displeasure saying…

What makes this reprise of their assault particularly disturbing is that just last night Sean Hannity hosted Brent Bozell, the president of the extremist right-wing media smear outfit, NewsBusters. During his segment Bozell angrily demanded that anyone who appears on a television news program must disclose their political leanings or recuse themselves. Apparently caught off guard, Hannity had to interrupt and insert an exception for himself:

Pfew. That was close. So Hannity established that it’s OK to engage in commentary and analysis if you reveal your political biases. However, when Media Matters’ Brock did so it was characterized by Doocy as justification for punishment by the IRS. Note that Brock’s admission that he is a Democratic activist applies only to his personal activity on Twitter and not to his work at Media Matters. He says so explicitly on his Twitter profile. So when Brock discloses his Democratic activism he is confessing to a crime, but when Hannity discloses his conservative activism he is exhibiting an honorable honesty.

The main topic of discussion for the Hannity/Bozell segment was the contention that there were numerous people who cycled in and out of media and the Obama administration. That’s actually true, but it is also true of every administration. Hannity and Bozell chose to highlight the person they regarded as the worst of the lot, Obama’s press secretary, Jay Carney, about whom Bozell said…

“We’re simply in the business of showing the other side. We balance out mainstream media.”

That’s a pretty straight forward admission that Fox is not a news network at all, but a partisan mouthpiece for Republican politics. Not that that wasn’t already apparent to anyone paying attention. In fact, the whole argument that Media Matters should lose its tax-exempt status due to the positions it takes on Fox News is an admission that Fox is a political enterprise. That’s because the laws governing tax status state that…

“…501(c)(3) organizations are absolutely prohibited from directly or indirectly participating in, or intervening in, any political campaign on behalf of (or in opposition to) any candidate for elective public office.”

Therefore, Fox is admitting that they are a political operation since the IRS rules only apply to political organizations. If Fox were a media company Media Matters would not be in violation of any rules. But none of these facts and associated logic will have any impact on the efforts of Fox News to get the IRS to do something to Media Matters that, for most of the last year, Fox has insisted was not proper for the IRS to do. Like everything else though, it’s outrageous for the IRS to scrutinize conservative groups for political behavior, but it’s perfectly OK to do it to liberals (IOKIYAR).