No “news” network has been more committed to promoting rumors and conspiracy theories than Fox News. And the most persistent fake scandal in the Fox News Bucket-o-Bullcrap is the allegation that the Obama administration attempted some sort of cover up following the terror attack on the United States facility in Benghazi, Libya. Still, after more than a year of congressional hearings, and independent investigations by government agencies and the press, there has not been a shred of evidence linking the White House to anything improper.

However, that record of abject failure isn’t enough to dissuade Fox News from continuing its crusade against President Obama and his staff. The latest spark that is firing up Fox & Co. is an email that was released by the conservative activists at JudicialWatch. The email itself reveals nothing new. In fact, it reiterates information that has been publicly available for months and has been affirmed by the intelligence community. Nevertheless, Fox is unleashing a flood of phony stories that serve no purpose other than to distort the facts and enrage their pitifully ill-informed audience. 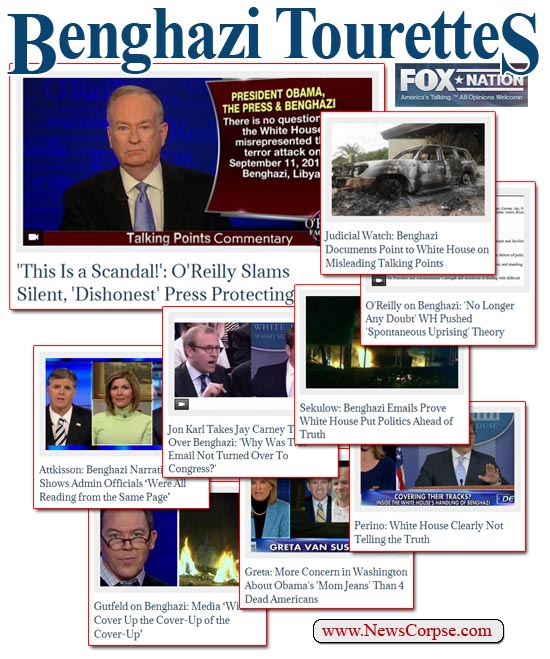 For more than 50 documented examples of Fox Nation’s lies…
Get Fox Nation vs. Reality. Available now at Amazon.

What Fox News and other Obama antagonists regard as the smoking gun is a single sentence (out of 112 pages) that they falsely connect to events in Benghazi. In that sentence Deputy National Security Adviser David Rhodes writes that among the goals of UN Ambassador Susan Rice, as she prepared for a series of Sunday morning news interviews, were “To underscore that these protests are rooted in an Internet video and not a broader failure of policy.”

However, what is left out by Fox, JudicialWatch, and virtually every right-wing pundit to comment on this, is that the email was not referring exclusively to events in Benghazi at all. It was a response to the much broader set of events in the Middle East including those in Libya, Egypt, Yemen, etc. This was expressed explicitly in another section of the documents that read “Clearly there are protests that are taking place in different countries around the world that are responding to the movie that was circulated on the Internet.”

It is unambiguously true that most of the unrest that was occurring contemporaneous to the attack in Benghazi was incited by the anti-Muslim video posted online by a raving American Islamaphobe preacher. No one, not even the deliberately deceitful folks at Fox News, dispute that.

So what we have now is Fox News pretending that the Rhodes email was related only to Benghazi when all the evidence shows that this is not the case. They have relaunched their 24/7 Grand Benghazi-thon wherein virtually their entire broadcast consists of nothing but Benghazi, and specifically their purposeful misrepresentation of this newly released email.

Over at their Fox Nation website they are suffering another seizure of Benghazi Tourettes. As of this writing there are nine separate articles posted on this one story. For reference, there are no stories posted about the GOP blocking the minimum wage bill, or the crisis in the Ukraine, or the devastating tornadoes in the Mid-West. On Fox Nation the only story of any significance is the trumped up Benghazi scandal. And the only thing that brings it back to prominence is an email whose contents Fox is lying about.