The National Rifle Association has a long record of defending the rights of every American to own firearms of any type and to carry them everywhere. It’s an agenda that enriches the NRA’s financial backers in the weapons trade, but endangers millions of citizens.

Now there is a new effort to restrict access to guns that would ordinarily get the NRA riled up in opposition. It follows the recent standoff at the Cliven Bundy ranch in Nevada where the Bureau of Land Management sought to hold Bundy accountable for violating the law and refusing to pay customary grazing fees for his cattle. In response to the BLM’s efforts to enforce the law, Bundy issued threats, saying that he had guns and was willing to use them. He was backed up by heavily armed militia members who stormed in to confront the BLM.

This is the backdrop for a legislative proposal by Utah Republican Chris Stewart who has analyzed the situation and concluded that there were too many guns in the mix and that steps must be taken by the federal government to disarm — the law enforcement officers. 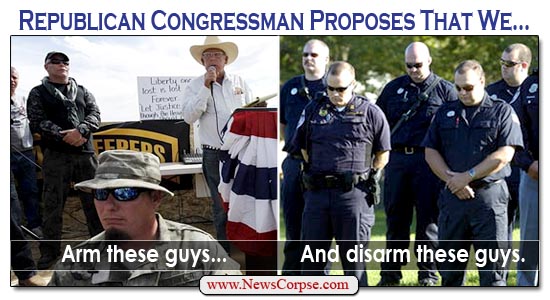 That’s right, unaccountable, and likely unstable, shady characters, who dashed across the country to defend a racist criminal, must be permitted unrestricted access to guns and munitions, even when they threaten to use them against their own government. But it’s the government agents who need to be relieved of their firearms. That’s the lesson that Stewart learned from the Bundy ranch episode.

This is where the NRA would usually step in and declare that anyone who wants to take away guns will have to “pry them from my cold, dead hands.” However, it seems that that sentiment only applies to lawless posses and murderers who were standing their ground. When it comes to the first responders who uphold the law and keep America safe, at great personal risk, the NRA has no principles or sympathy.

It is not surprising to find this sort of hypocrisy by the NRA-theists who are opposed to even the most common sense reforms that the American people favor by large majorities. But it is surprising to find that a sitting Republican representative can observe the disturbing events at the Bundy ranch and come away believing that it’s our law enforcement officers who should be disarmed.

9 thoughts on “Where’s The NRA? GOP Rep Wants To Take Guns Away – From Law Enforcement”