As if it weren’t bad enough that Fox Nation populates its web site with right-wing hysteria and links to uber-conservative purveyors of propaganda, they have now demonstrated that their editors are (at least) as stupid as their readers are gullible.

Today I observed a graphic at Fox Nation linking to a column in the Washington “Moonie” Times written by Amanda Carpenter, an O’Reilly Factor frequent fluffer. The article itself was chock full of nuttiness that I’ll get to momentarily. First I need to point out that Fox Nation is so desperate to disparage its enemies that they will project whatever demon suits them into their coverage whether it’s there or not. Here is the graphic showing the groups they say are allegedly mobilizing against town hall protesters: 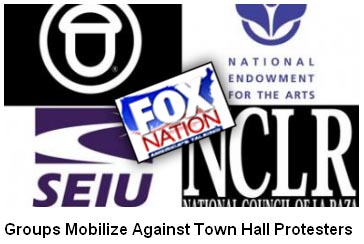 The National Endowment for the Arts??? Are they really mobilizing against town hall protesters? Were those artists who were crashing community centers and public halls where Tea Baggers were fighting to keep the insurance companies between you and your doctor?

The problem with this picture is that Carpenter’s article says nothing about the National Endowment for the Arts whose logo is prominently displayed in the upper-right corner. There is a passage that mentions the NEA, but she is referring to the National Education Association. Rather than ascertain the facts, Fox Nation saw an acronym that could just as well have belonged to a favorite foe of theirs, so they giddily inserted the wrong logo into their graphic. And they consider themselves to be a “news” organization. I suppose it’s easier to demonize artists than teachers. The only thing Fox Nation cares about is assembling the usual targets of their wrath – community organizers (ACORN), unions (SEIU), minorities (NCLR), and, of course, those subversive artists – for a public whipping. 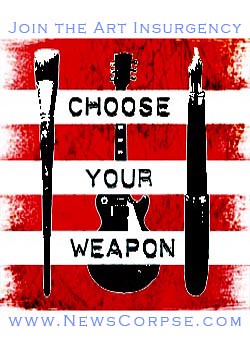 As an artist myself, I wouldn’t mind seeing the Endowment get more actively involved in countering the thugs who are brazenly trying to shut down democratic discourse. I have long believed that the role artists have traditionally played in social movements has been diminished in this age of corporate controlled marketing and the cultural aversion to artists who speak their minds (i.e. shut up and sing). But for Fox Nation to falsely charge that the NEA is mobilizing against protesters (an absurd charge in any context) is slanderous. And it is especially egregious when the slander is the result of an idiotic editor who can’t figure out which organiztion he’s supposed to be hating.

The article itself is rich with ridiculous reportage. It’s premise is that there is something terribly wrong with the way that Democrats plan to respond to the right-wing mobs that are disrupting town hall meetings between congressional representatives and their constituents.

It has been well documented that the right is coordinating their protests through political and industry front groups like Conservatives for Patients Rights, Americans for Prosperity, and FreedomWorks. These organized creators of chaos have distributed instructions on how to cause a commotion. Participating in a productive and civil discussion is the farthest thing from their minds.

What makes this article exceptionally ludicrous is that Carpenter’s examples of what she characterizes as untoward behavior from leftie activists pales in comparison to what the Tea Bagging bullies have put forth. Let’s take a look:

So while the left wants to be helpful, positive, and avoid shouting matches, the right wants to lie, disrupt and rattle the targets of their tantrums. Which side really sounds like a mob to you?

The fact that Carpenter and the Washington Times thought that it served their purpose to illustrate these differences just defies comprehension. And to complete the circle of the Murdoch-driven disinformation campaign, Carpenter appeared on Fox News this morning to make the same scandalous assertion that health care advocates are conspiring to be “helpful.” OMG!