Every now and then Fox News blurts out tiny, but perceptible, snippets of truth, often when they don’t even realize it. Such a moment occurred yesterday on The Five as Eric Bolling (of the Bloody Hand) launched into an error-riddled tirade against the Obama administration’s remarks following the terrorist attack in Benghazi.

In the course of Bolling’s frothy outrage, he sought to illustrate his point that Obama, whose administration is responsible for capturing or killing more terrorists than Bush ever imagined, is weak on terror with a reference to the deadly raid on Osama Bin Laden. Here is the delightfully loopy exchange between Bolling and his co-host Dana Perino:

Bolling: There’s one more piece of this. Don’t forget this was prior, PRIOR, to Osama Bin Laden being taken down. And the thought was, is President Obama going into the election soft of terror or not? And a lot of people are saying [to Perino] It was after?
Perino: Much after. Yeah, a year.
Bolling: OK, I take it back.
Perino: A great point if it were true.

Indeed. What a great point that would have been if hadn’t been made up by an imbecile who doesn’t even bother to check the most basic facts. This was not a careless mistake in the course of an unrehearsed discussion. Bolling was reading from a prepared text. And the casual dismissal of his flagrant blunder, that he would simply “take it back,” demonstrates the lack of seriousness he has for factual reporting. It’s that cavalier attitude that Stephen Colbert highlighted last night (video below) when addressing the same segment and Perino’s odd compliment that the point would be great, but for the triviality that it was false:

Colbert: That’s undeniable. A great point and a fantastic new motto: Fox News. Fair and balanced. A Great point if it were true. Still I’ve gotta give a wag of my finger to Dana Perino. Why did you correct him? Bolling was pulling a passionate heartfelt conspiracy theory straight out of his ass. You don’t interrupt a man in mid yank. That’s rude.

Ordinarily, no one on Fox News is corrected that quickly (or at all) when they make ridiculous mistakes or tell obvious lies. That’s because their mission is to spread disinformation, not to inform. Bolling’s commentary was a part of Fox’s standard operating procedure and, if anything, Perino was off script and likely rebuked for her correction after the show. But Fox has recovered their composure and restored their focus on defaming Obama and the Democrats. As evidence of this, note the segment that aired this morning that brought all of the current Fox-hyped pseudo-scandals together in one package: 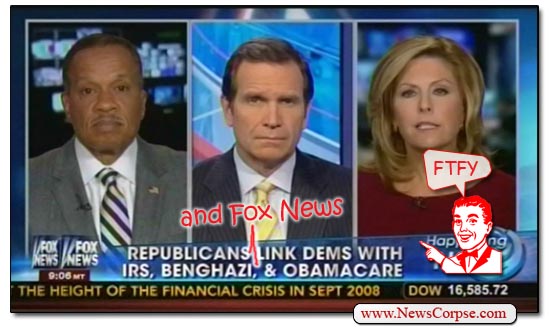 And here, for your viewing pleasure, is the segment from the Colbert Report:

7 thoughts on “Fox News: Fair And Balanced? A Great Point If It Were True”