The ever-shifting attitudes on the crisis in Syria by Fox News have already seen the network condemn President Obama for proposing that the White House take unilateral action against Syria, then complaining when the President brought Congress into the decision-making. They blasted Russian president Vladimir Putin for his alliance with Assad, then hailed him as deserving of a Nobel Peace Prize.

The only distinction between any of their positions and their subsequent contrary positions was where they thought Obama stood at the time. It’s as predictable as night following day. If Obama is for it, Fox fires on all cylinders to convince their gullible audience that there is something terribly wrong with it. 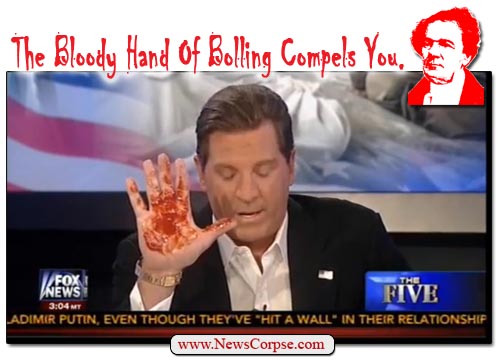 But Fox doesn’t always take an entirely negative approach. Sometimes they see a positive path to promote their kneejerk anti-Obamaism. Eric Bolling, co-host of Fox’s The Five, saw just such a path yesterday to advance a truly harebrained idea that was floated by Fox’s CEO, Roger Ailes. Bolling pretended that he just happened to be reading a sycophantic Ailes biography that was published a year ago (what took him so long), and discovered a passage that pertained to the current state of affairs in Syria. In a couple of rather vacant paragraphs, Bolling saw something so profound that he proclaimed that he was “about to blow your mind.” He then recited from the hallowed text of the book…

“Putin is angry. He thinks the United States doesn’t take him seriously or treat Russia as a major player. Okay, fine, that’s how he feels. If I were president, I’d get in a room with him and say, ‘Look at the slaughter going on in Syria. You can stop it. Do it, and I’ll see to it that you can get all the credit. I’ll tell the world it was you who saved the innocent children of Syria from slaughter. You’ll be an international hero. You’ll go down in history.’ Hell, Putin would go to bed thinking, ‘That’s not a bad offer.’

There will still be plenty of other issues I’d have with Russia. But instead of looking for one huge deal that settles everything, you take a piece of the problem and solve it. Give an incentive for good behavior. Show the other guy his self-interest. Everybody has an ego. Everybody needs dignity. And what does it cost? You get what you want you give up nothing.”

Let’s break this down. Ailes essentially proposed that Obama suggest to Putin that he should do something that he already knows he can do, and that he can do without any help from Obama. Then Obama is supposed to magnanimously offer to let Putin take credit what he (Putin) actually did. It’s a little like saying “Hey Roger. Why don’t you donate $10,000 to the Red Cross and, if you do, I’ll let you have all the credit.”

The proposal by Ailes is so devoid of substance that it can hardly be construed as a proposal at all. What’s more, it is ludicrous to think that Putin would have been interested in taking credit for leaning on Assad when Putin was allied with Assad’s efforts to defeat the rebels trying to depose him. Had Obama suggested that Putin tell Assad to retreat in the battle to preserve his rule, Putin would have gone to bed thinking “What a putz.”

Ailes seems to have no conception that “good behavior” is a subjective term and that it means something very different to Putin and Assad than it does to Ailes or Obama. It was the use of chemical weapons that upended the playing field and jolted Putin’s perspective to one that might find common ground with Obama and the rest of the civilized world. But that happened last month, not last year, and absent that, Putin would have laughed off any attempt to come between him and his pal Assad.

Eric Bolling has demonstrated that he is just as clueless as Ailes. His recitation of this dimwitted plan is nothing more than brown-nosing his boss and wasting air time to engage in rank self-congratulatory blather. Bolling has never distinguished himself as much of thinker, but this transparent act of vanity really drives home the point that he is incapable of original thought or coherent analysis. And that’s probably a good sign that he has a fair degree of job security at Fox News.