The faux patriots at Fox Nation are continuing to make a habit of exploiting the image of 9/11 and contriving false and negative associations with Democrats. This time Rupert Murdoch and Co. have outdone themselves by accusing President Obama of politicizing the anniversary of the attack on the World Trade Center and other targets.

It takes a pretty hefty portion of chutzpah for the Fox Nationalists to sell this falsehood. Particularly in light of how brazenly they themselves have been politicizing 9/11:

In this latest episode, Fox Nation links to an article at RedState, the blog of the uber-rightist magazine, Human Events. The RedState column credits the equally right-wing Heritage Foundation for discovering what they characterize as a despicable act of political exploitation.

What these stalwart detectives found was a notice on the website of Organizing for America (OFA), the Democratic National Committee’s social networking site for Democratic activists. Note: This is NOT a site that is affiliated with the White House or the President.

The offending notice was posted by a user seeking participants for a health care reform event. The notice itself could reasonably be regarded as offensive and inappropriate, but no more so than what Fox Nation has published itself. 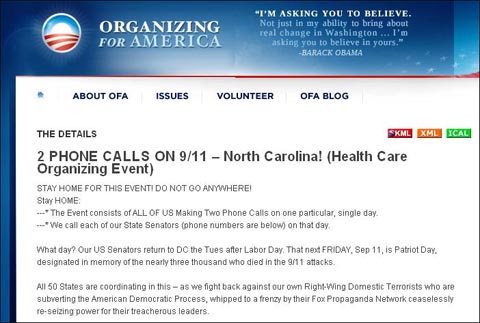 “Sep 11, is Patriot Day, designated in memory of the nearly three thousand who died in the 9/11 attacks.

“All 50 States are coordinating in this – as we fight back against our own Right-Wing Domestic Terrorists who are subverting the American Democratic Process, whipped to a frenzy by their Fox Propaganda Network ceaselessly re-seizing power for their treacherous leaders.”

I can’t say that I disagree with the assessment of Fox News, but the reference to right-wing domestic terrorists was unnecessarily contentious. However, the response by Heritage/RedState/Fox Nation is ludicrous beyond imagination.

First of all, the OFA web site is a user driven site. That means that anyone can post comments, blogs and even announcements of upcoming events, as is the case here. So those responsible for the site’s administration (the DNC) cannot be blamed for inappropriate material that they did not produce or authorize. The site’s administrator did become aware of the posting and promptly removed it. Now you would think that the martinets of manners at RedState would be assuaged, even encouraged, by this behavior, but no. They quickly leaped to a new accusation that the web site had “scrubbed” the embarrassing content. How can OFA win? If they leave the posting up, they are guilty of denigrating the memory of 9/11. If they take it down, they are alleged to be hiding something.

Remember, this is the same organization that permitted Michael Scheuer to appear with Glenn Beck and openly root for another terrorist attack on America:

“…the only chance we have as a country right now is for Osama bin Laden to deploy and detonate a major weapon in the United States.”

So, does Murdoch’s organization want another 9/11? That sounds much more plausible than the assertion that Obama’s organization is politicizing 9/11. This is nothing more than the routine disingenuous outrage from people who only know how to stir up mischief, even when none occurs. And for the Fox Nationalists to raise the ante by publishing gut wrenching photos of the 9/11 attack, with a completely dishonest headline, is the height of cynical and grotesque politicization. Especially after all of the examples above of obvious and intentional politicization on the part of Fox.

But don’t get comfortable yet. Fox News has been running promos today for tonight’s O’Reilly Factor that promise to blow the lid off of this fake scandal. So this nonsense is going from a bunch of ignorant think tankers and bloggers, to the number one cable news program in America.

Seriously…Is this all they’ve got?