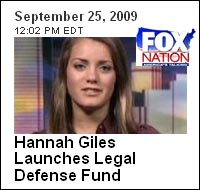 In yet another example of the interconnectedness of Fox News to blatantly partisan political activities, a “news” link on the Fox Nation website actually goes to a defense fund donation page for ACORN foe, Hannah Giles. You may recall that Giles is the YAFfie who dressed up as a hooker and accompanied her ersatz pimp, James O’Keefe, on a mission to entrap ACORN workers on hidden video.

The defense fund site was set up by the Plano, TX, based Liberty Legal Institute, an organization whose mission statement describes as their purpose…

“To achieve expanded religious freedom and family autonomy through litigation and education designed to limit the government’s power, increase the religious rights of citizens and promote parental rights.”

A defense fund for Giles appears to be outside the mandate of LLI, as it has nothing to do with religious and/or parental rights. Nevertheless, the right-wing organ has assumed responsibility for raising cash on behalf of the pseudo-journalist. The site’s administrator is Roe Ann Estevez, Director of Marketing for the LLI affiliated Free Market Foundation. Despite its name, it is also a faith-based enterprise that seeks to impose religious principles into government affairs.

However, the big problem here is that Fox has partnered with these conservative organizations to provide legal funds and cover to an individual who is an avowed activist for conservative causes, and who is presently being investigated for violations of privacy laws. The link at the Fox Nation will not land you on an article about the defense fund, but on the fund’s donation page. It does not provide information about the legal efforts on behalf of Giles or the groups organizing those efforts. It simply provides you with a solicitation to contribute.

The closeness of this association flies in the face of Fox’s recent attempts to distance themselves from the activities of Giles and O’Keefe. When ACORN announced that they would be suing the pair, along with Fox News, Fox complained that they had nothing to do with the video stunt. They asserted that they were merely broadcasting a story brought to them by a couple of independent reporters with whom they had no affiliation. But by openly promoting a defense fund for Giles, Fox can no longer pretend that there is no relationship between them.

As further evidence of Fox’s complicity with the anti-ACORN punkers, James O’Keefe will be interviewed this Sunday by Chris Wallace. This is another in a long line of appearances on Fox, the only network where the pair will agree to be questioned.

This fundraising project by Fox is an egregiously inappropriate affront to journalistic ethics. What would Bill O’Reilly say if CBS News directly promoted a defense fund for the fired ACORN workers? That is simply not within the purview of a legitimate news organization. And there is the key word: legitimate. Fox News is proving once again that they can make no claim to legitimacy. They are an unabashedly partisan player with an open interest in advancing their own political agenda. Nothing more.