After months of turmoil, the stock market has clawed its way back to levels that haven’t been seen for a year. Passing the 10,000 mark would ordinarily be perceived as good news by most market analysts and millions of investors, many of whom are relying on market performance for their future security and retirement.

But Fox News, the network that celebrates America losing the Olympics, and laments the President being honored with a Nobel Peace Prize, sees things differently. 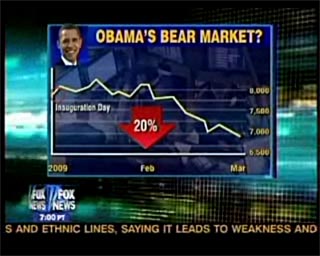 Last March, Fox News was the first to report that a declining Dow was unambiguously the fault of Obama, who had been in office for a little more than a month.

Fox declared the declines “Obama’s Bear Market.” They illustrated their coverage with colorful charts highlighting the foreboding financial trends that were about to sink all future hopes of America.

Unfortunately for Fox, later the same month the market began what would become an unprecedented turnaround. It would rise 21% in 16 days – a feat that has not been recorded in modern stock market history 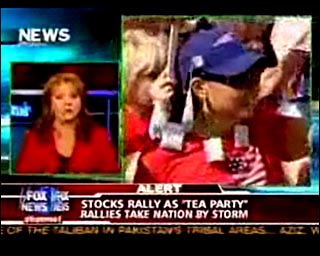 Undaunted, Fox came up with a unique explanation for why Wall Street would suddenly seem to be reacting positively to a Muslim, communist, alien president. It was the Tea Parties:

“Call it a tea party rally. Wall Street’s sure partying, up six weeks in a row. The bulls came out about the same time these guys started to shout.”

In April the market continued its winning ways. This led Fox News to seek a new excuse for good fortune that was clearly driving them nuts. I mean, nothing positive could possibly be attributed to this president, so there must be another explanation. They hit on the notion of a bear market rally, which they then turned into a persistent talking point. 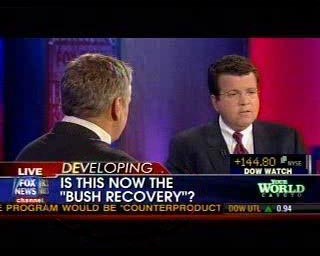 And capping off the Fox News campaign to deny Obama any credit for the still advancing market, having now risen about 40% in seven months, Fox has raised the stakes and brought in their “A” game. They are now, in all seriousness, proposing that what we are seeing here are the effects of the Bush recovery.

The same folks who were insisting that Obama was responsible for every negative occurrence – from suicide bombings in Islamabad to pimples on teenagers – from the day after his illegitimate inauguration, now assert that Bush, from whom financial duties were stripped when the economy went south in August of 2008, that Bush somehow deserves recognition for his role in the market comeback.

To summarize, if something bad happens it doesn’t matter how early in his term it is, Obama is the owner and the cause of it. If something good happens it wouldn’t matter if it were the middle of his second term, he is merely a lucky bystander. It was probably something Reagan did thirty years ago.

Are even Fox News viewers stupid enough to fall for this? Please tell me they aren’t.