Much of the right-wing blog and cable crowd is aghast at what they regard as the disrespect accorded to the American flag by a video in an online contest for health care reform ads. The contest is sponsored by the Democratic National Committee’s Organizing for America.

I happen to think that’s a pretty fine video. It makes its point in a creative and compelling way. There is nothing derogatory directed at the flag because there is, in fact, no flag. It’s a painting. And the commentary affixed to it tells a story about our nation and what we can achieve.

Nevertheless, the hypersensitive panic attackers on the right are having conniptions. Sean Hannity and Michele Malkin tried desperately to twist this into a scandal. Fox Business News anchor, Jenna Lee, hosted a debate that featured Armstrong Williams calling it obscene. Gretchen Carlson and the Fox & Friends crew commiserated about what Carlson said was a movement to make the flag offensive. Bill O’Reilly wasn’t all that disturbed until his guest, Laura Ingraham got him riled up. Ingraham even talked hypothetically about how disrespectful it would be if someone were to walk on a flag.

That’s funny, she never had that problem when George W. Bush actually did walk on a flag. It goes without saying that stepping on a flag is disrespectful, and letting it touch the ground is officially regarded as desecration. So is placing any mark, insignia, letter, word, etc., on it. But that didn’t stop Bush from signing a flag. 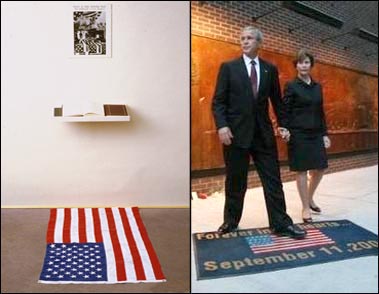 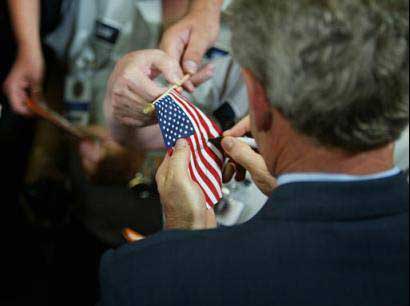 These hypocritical pseudo-patriots just don’t know the difference between art and actual desecration. They are obsessed with exploiting non-events to promote their own twisted view of patriotism. More than anything else, they want to manufacture controversies that harm the President, Democrats or liberals in general. Fortunately, this is precisely the sort of fanatical ranting that is driving reasonable Americans farther from the Republican Party and its PR arm, Fox News.

2 thoughts on “Desecrating The American Flag”