News Corp. Chairman and CEO Rupert Murdoch gave a wide-ranging interview to his own Sky News Australia. He is apparently not in a very good mood.

The interview touched on the so-called “war” between Fox News and the White House. Murdoch was asked a question about assertions that Fox is “an arm of the Republican Party.” Murdoch responded saying, “Everyone knows that’s nonsense” and charging that White House press secretary, Robert Gibbs, is “a very young, inexperienced guy.” Of course, it was White House communications director, Anita Dunn, who made the comment, not Gibbs. Murdoch continued his defense of the fairness of Fox by bashing President Obama. When asked how the President was doing, Murdoch glibly replied with one word: “Badly.” He then claimed that only a couple of commentators on the network were presenting opinions. However, we know that isn’t true. Nevertheless, he falsely asserted that…

The truth, however, is that Fox does not have now, nor ever has had, a program hosted solely by a Democrat/liberal. CNN has Lou Dobbs, Nancy Grace, and until a few months ago, Glenn Beck. MSNBC currently has a three hour morning show hosted by conservative former Republican congressman Joe Scarborough. They have also employed Tucker Carlson, Laura Ingraham, and Michael Savage. Despite the evident dishonesty by Murdoch, he still defends his network’s balance. When the interviewer inquired as to characterizations of the President as Stalinist, Murdoch firmly objected saying, 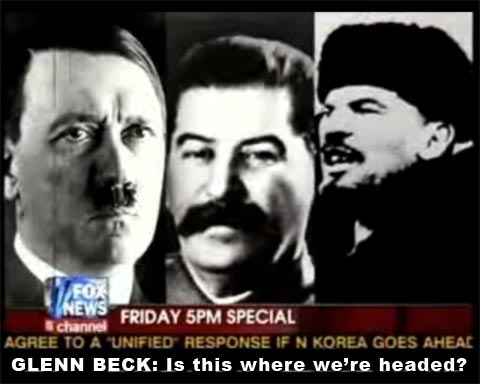 This screenshot is from the Glenn Beck show wherein Beck displayed pictures of Hitler, Stalin, and Lenin, and asked, “Is this where we’re headed?” But perhaps the most shocking moment in the interview was when Murdoch was asked about Beck calling the President a racist. Despite the widespread condemnation of Beck, the loss of eighty advertisers, and even Murdoch’s qualification that the comment may not have been proper, Murdoch openly and unequivocally declared that he agrees with Beck.

“He [Obama] did make a very racist comment about blacks and whites and so on. Which he said in his campaign he would be completely above. And it was something that, perhaps, shouldn’t have been said about the President, but if you actually assess what he [Beck] was talking about, he was right.”

So now we have an unadulterated admission from Murdoch that he believes the President is a racist. If there was ever a time to make Murdoch pay for the blatant bias and hostility for which he and his enterprise are responsible, it is now. If Beck can lose eighty advertisers for calling Obama a racist, what penalty should Murdoch pay?

Two organizations have already embarked on protest activities aimed at Fox News. Color of Change is the group that successfully persuaded advertisers to shun Beck. MoveOn has a petition requesting that Democratic representatives avoid fox News. Both of the groups should now escalate the actions to include all Fox programs and all Democratic and progressive politicians, advisors, consultants, etc.

Fox News, and the rest of the Murdoch empire, has absolutely no credibility or integrity. They do not deserve to be regarded as a news enterprise. They have demonstrated their overt prejudice and their intent on being rightist advocates, not journalists. Murdoch says that he wants to be remembered as…

“…someone who has contributed to the world and has tried to make the world more interesting and better. And used the media to good effect.”

Well he certainly has made a contribution. He has contributed Glenn Beck and Bill O’Reilly and Sean Hannity and more division and hatred than any media organization before him. And he has used the media to good effect. Well…it’s good if you like people shouting down free speech at town hall meetings and carrying posters of the President with Hitler mustaches. So it is our duty to treat them the same way we would treat partisans like the National Review, the Weekly Standard, WorldNetDaily, the Drudge Report, or any other avowed opponent. It is time to make a stand.

Stay the HELL off of Fox News: Starve The Beast!

Update: Media Matters has started an online petition calling on Murdoch to apologize. I don’t think that he will do so, but I do think it helps to send a message to him and the rest of the media that his remarks are objectionable and inappropriate. So go sign the petition.

Update II: Gary Ginsberg, a spokesman for Murdoch told Politico that Murdoch “does not at all, for a minute, think the president is a racist.” Sort of makes you wonder what he meant when he said that Glenn Beck was right when he called Obama a racist. But Ginsberg refused any further comment.

7 thoughts on “Rupert Murdoch: Glenn Beck Is Right. Obama Is A Racist”