This Memorial Day weekend President Obama made a surprise trip to Afghanistan to thank soldiers there, and everywhere, for their service. As a matter of routine, a list of those meeting with the President was released to the press. Unfortunately, that list mistakenly included the name of the CIA station chief in Kabul.

While this was a serious oversight, its impact is mitigated by the fact that this person’s identity is not strictly secret. It is expressly released to Afghan officials and others in the region. What’s more, the list was prepared by the military, not the White House, so the knee-jerk reaction by conservatives in the media to blame Obama is misplaced and overtly political.

Among those crassly political knee-jerkers is former Bush era ambassador to the United Nation, John Bolton. Bolton appeared on Fox News in an interview with anchor Bill Hemmer. The tone of the exchange was set at the very beginning when Hemmer asked Bolton the fair and balanced question, “What do you think of this bonehead move?” Well, I guess we know what Hemmer thinks of it. Not surprisingly, Bolton unleashed a spittle-inflected harangue that accused the President of “jaw-dropping incompetence.” Hemmer later asks whether it is fair to compare this event to the outing of covert CIA operative Valerie Plame. Bolton, of course says “I don’t think so,” and dismisses the Plame incident as “just a malicious piece of gossip.” 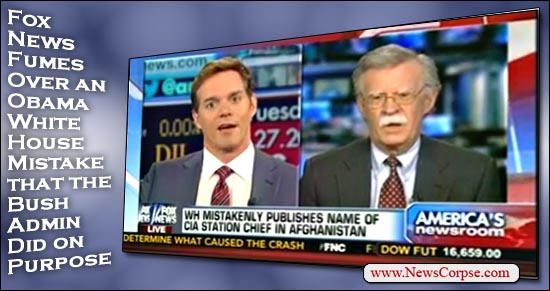 For the record, Valerie Plame was a deep-cover agent whose outing had the potential to result in the death of herself and those with whom she associated in some dangerous parts of the world. Her outing was not an accident, as was the Kabul station chief. Her identity was deliberately disclosed in retaliation for her husband’s criticism of the Bush administration’s lies justifying the invasion of Iraq. In other words, it was a petty and personal retribution for which Dick Cheney’s chief of staff, Scooter Libby, was convicted and jailed.

Any objective analysis of the facts show that there is no reasonable comparison between the two intelligence leaks. For Bolton and Fox News to try to turn this into another manufactured outrage without acknowledging their staunch defense of those involved in outing Plame is jaw-dropping hypocrisy. But what truly makes this rise to epic levels of hypocrisy is that Bolton himself has been implicated in the outing of Plame. Others involved include Cheney, Colin Powell deputy Richard Armitage, New York Times writer Judy Miller, the late Robert Novak, and (surprise) Karl Rove. Note: Miller, Novak, Rove, and Cheney’s daughter Liz, have all been Fox News contributors.

Nevertheless, watch for Fox News to churn up the heat on this editing error and cast all the blame on Obama as if he had personally approved the list for distribution. It is evidence of how little of substance conservatives have to criticize the President for, so they have to resort to fanning the embers of pseudo-scandals for which they have no proof, or even a basis for speculation.