If it isn’t already bad enough that Fox News is the home of repulsive characters like Sean Hannity, Eric Bolling, Sarah Palin, Keith Ablow, Ralph Peters, Liz Trotta, etc., they have just revealed a new associate who joins their Confederacy of Crackpot Contributors. And they must have really scraped the barrel bottom to get him unstuck. 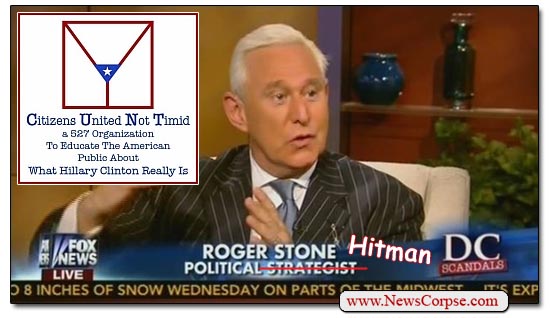 Roger Stone is a veteran Republican operative who cut his teeth in the nastiest campaigns of Richard Nixon. In 2008 he founded a group to oppose Hillary Clinton’s primary campaign that he called “Citizens United Not Timid,” or C.U.N.T. He said that the group’s mission was “to educate the American public about what Hillary Clinton really is.”

Stone also spoke up for his pals in the Tea Party by saying that they were “the storm troops of the Republican Party. Don’t offend them.” And, yes, that reference to the brutal Nazi special forces was meant as a compliment.

It’s pretty obvious that Stone was drafted at this time to assist the Fox team in their defamation of Hillary Clinton. It is a specialty of Stone’s and he will compliment Karl Rove, whose recent cloddish swipes at Clinton as old and brain damaged have defined the tone that Fox intends to use going forward.

Apparently Fox felt they needed reinforcements prior to the commencement of the election season. So they turned to a real spit-baller to bring the debate down to the lowest, most nauseating level. Then again, Stone is just the right guy for the hate-filled dirtbags who watch Fox. One thing you can say for Fox: They know their audience.