The Republican Party already has serious problems with some of the most critical voting demographics. They have thoroughly alienated African-Americans and Latinos. Their appeal to young voters is weak and worsening. Thanks to their opposition to reproductive choice and pay equity, women are loathe to consider Republican candidates. And now the politically tone deaf GOP is determined to antagonize the nation’s most reliable voting bloc – senior citizens. 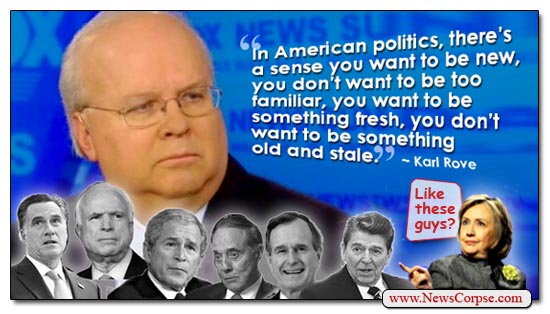 It’s not bad enough that Republicans have already put some distance between themselves and seniors by proposing cuts to Medicare and the privatization of Social Security. The latest insult to older Americans is that they are not fit to serve in public office, particularly the presidency.

This view was clumsily articulated by master GOP strategist, Karl Rove, who appeared on Fox News today to criticize Hillary Clinton. According to Rove, the former First Lady, Senator, and Secretary of State is in a “vulnerable position” due to her age and experience. Rove said that people won’t like Clinton because “they want to see a fighter,” which he seems to believe is a trait that only the young’uns can muster. His precise wording was…

Make no mistake, Rove deliberately chose the words “old and stale” to invoke Clinton’s age. It was just as deliberate as his disgusting choice of words last week to falsely suggest that Clinton had suffered brain damage in a fall last year. This is typical Rovian, slash-and-burn politics.

It is also strikingly stupid when you consider the most recent Republican candidates for president, whom Rove certainly supported. There was Mitt Romney, a two-term governor who ran for president twice, making him rather familiar. There was John McCain who is even older than Clinton and served as senator for more than two decades. Before that it was Rove’s own invention, George W. Bush, another two-term governor and the son of a president and the grandson of a senator. Prior to that it was the 73 year old, 27 year senate veteran and Republican leader Bob Dole. Before him was W’s dad, who had been around Washington for decades as a congressman, CIA director, and vice-president. Preceding him was Ronald Reagan, who was also older than Clinton when he was inaugurated after serving as governor of California and multiple runs for the White House.

Do the terms “fresh,” or “new,” or “unfamiliar,” apply to any of those candidates? Does Rove’s perception of what is old and stale only apply to Democrats – or women? And is Rove suddenly enamored of the sort of inexperience and unfamiliarity that he used to disparage when talking about President Obama? In fact, the entire Republican Party that once mocked Obama as a novice, is now almost exclusively fixated on even greener pols like Ted Cruz, Rand Paul, and Ben Carson. Those are the candidates to whom Rove is referring when he says that voters are looking for “a Republican with a constructive conservative agenda with the future.” Unfortunately they, like most Republicans, have their sights set squarely on the distant past, circa Dark Ages.

Worst of all, Rove is demonstrating open contempt for senior citizens with his insults to their capacity to be effective leaders. So even dismissing his rank hypocrisy, he is not making any friends with the older voters he clearly despises. Hopefully, Clinton’s campaign, should it materialize, will remind these mature voters just how scornfully Republicans regard them and their ability to contribute to society.