Here’s more proof that Rupert Murdoch and his Fox News empire are anxiously awaiting a terrorist attack that they can celebrate. It has already been established that they are aiding and abetting terrorism by helping to spread the fear that terrorists rely on. Fox wants us to be just as afraid as Al Qaeda does. And in pursuit of that goal they publish lies like this one: 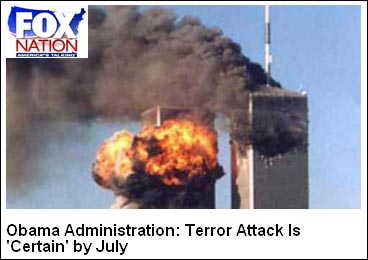 The article linked to by the Fox Nationalists appears in the Washington “Moonie” Times. And both so-called “news” enterprises falsely report the congressional testimony by the Directors of National Intelligence and the CIA. Here is the actual content of the testimony:

Sen. Diane Feinstein: What is the likelihood of another terrorist-attempted attack on the U.S homeland in the next three to six months? High or low?
DNI, Dennis Blair: An attempted attack, the priority is certain, I would say.”

Contrary to the sensationalist headlines on Fox Nation and the Washington Times, the administration never said that an attack is “certain.” The operative word is “attempted.” It is a rather obvious and foregone conclusion that terrorists are out there attempting to attack us and others. The question, and the answer, was hardly revealing. But Fox never misses an opportunity to fear monger. And they have a long history of politicizing terror and 9/11.