On Christmas day the passengers of a plane bound for Detroit narrowly missed a catastrophe. At this time there is still much that is unknown about the attempted act of terrorism, the culprit, or his affiliations. But one thing is clear: It is all the Republican’s fault. 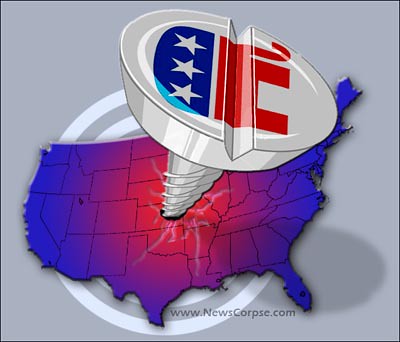 Is that too hyperbolic an assertion so soon after the incident occurred? Of course it is. But that hasn’t stopped Republicans from asserting that very same claim against Democrats with all seriousness. In a cynical and self-serving search for blame, it only took a few hours for Republicans to start throwing charges at President Obama.

Rep. Pete Hoekstra (R-MI) was asked Sunday if it was fair to blame Obama. Without hesitation he answered, “Yeah, I think it really is.” Sen. Jim DeMint (R-SC) fingered the unionization of airport security workers and the closing of Gitmo, along with the standard allusion to appeasement. And scads of right-wing bloggers piled on the Transportation Security Administration and Homeland Security Secretary, Janet Napolitano.

A closer look at the circumstances preceding the attempted attack paint an entirely different picture. For instance it is DeMint who has been personally blocking the President’s TSA chief appointment for months. House Republicans, including most of their leadership, just voted against funding for explosives detection systems and other aviation security measures. And the House recently passed a Republican-authored bill to ban the use of the full-body scanners that many are claiming could have prevented this incident.

The most damning evidence of the Republicans guilt is seen in the rhetoric they’ve employed for many months that casts Obama as weak and our nation as more vulnerable than ever. They seem to be signaling to Al Qaeda that now is the time to strike. Take note of what Dick Cheney said about this five years ago:

And ever since Obama took office Cheney and other Republican officeholders and pundits have been striving to manufacture such a perception. Some examples:

Cheney: It is recklessness cloaked in righteousness and would make the American people less safe.

Mitt Romney: It’s the very kind of thinking that left America vulnerable to the attacks of Sept. 11th.

Joe Scarborough (MSNBC): I knew by the second day that America was less safe.

John Boehner: I think this is a pre-9/11 mentality, and I think it’ll make our nation less safe.

David Gregory (Meet the Press): But do you agree with the vice president when he says that the country is less safe under President Obama?
Newt Gingrich: Absolutely.

In other words, “Come on down, Al Qaeda. The door’s wide open and we’re sitting here playing tiddlywinks.” I first asked this question last May:

“How does announcing to the terrorists that they believe our nation is becoming weaker make us safer? Do they even care? Are they just pasting a big bulls eye on America and hoping for an ‘I told you so’ moment?”

It appears from the Republican’s response to this latest incident of terrorism that my speculation was sadly on target. It appears that the only things the right are interested in are bashing Democrats, announcing alleged security flaws, and gloating when the unthinkable (almost) happens. That is not a recipe for national security. And if they don’t cut it out, they are going to regret the consequences which will be tragic and entirely their fault.

8 thoughts on “Republicans Are To Blame For Terrorism”