The terminally choleric Andrew Breitbart is embroiled in a flame war with journalist Max Blumenthal. The online altercation was sparked by Breitbart’s dishonest defense of ersatz pimp, James O’Keefe. Then it flared up at CPAC.

Blumenthal valiantly, but vainly, attempted to get O’Keefe to sit still for an an interview. He was, however, able to ask O’Keefe’s hooker, Hannah Giles, a few questions. And this display of responsible reporting set Breitbart off on one of his patented petulant tantrums that would embarrass kindergartner.

After having his sneering mug plastered all over YouTube, it was plain that Breitbart was nothing more than a cantankerous old windbag. He’s a little like Don Rickles if you squeezed out every drop of humor. It’s just one insult after another with no substance or civility. He called Blumenthal a “despicable human being,” and “the lowest life form I’ve ever seen.”

And now, to top it off, Breitbart has scored what he must think is the journalistic scoop of the decade. He captured Blumenthal on video engaging in an act so vile it could bring down all of the institutional left in three weeks. Breitbart actually claimed on Fox News that he was going to that, and this must be his endgame. 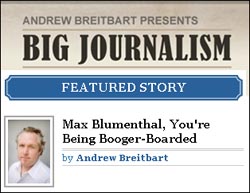 What was this offending behavior that has so much significance? While Blumenthal was talking to Giles, she alerted him to the presence of something protruding from his nose and he endeavored to remove it. Saints preserve us.

Breitbart posted the video of this on his web site. Well, actually web “sites.” He has featured it on all three of his “Big” web sites, as well as his eponymous Drudge spinoff. The funny thing is that Breitbart, who insists that he wants to be taken seriously by the media, posts a video of a political rival picking his nose, and he thinks it makes his rival look bad. Blumenthal may have been caught in an all too human moment, but Breitbart will now forever be known as the man who breaks booger news. Nice work, Booger Breitbart.

Update: And of course, Fox gets into the booger business by featuring this video on the front page of Fox Nation – with a photo no less.

2 thoughts on “This Is How Stupid Andrew Breitbart Is”