Glenn Beck is feeling the heat from his repulsive commandment that his you should leave your church if it advocates social justice. Church leaders from across the religious spectrum are renouncing the ravings of His AssHoliness™. But there is another factor in this affair that ought not to be ignored. 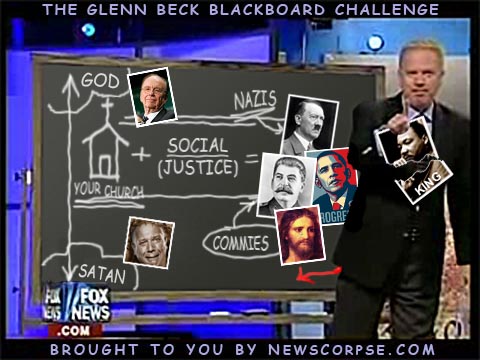 When it suits his purpose, Beck will not hesitate to embrace Martin Luther King. Beck has even included King’s picture and words in the opening credits of his TV show (but no more).

On the many times that Beck is accused of being racist he will cite King in an attempt to inoculate himself from the invariably correct criticisms. But that hasn’t prevented him from also calling King a radical and questioning whether there should be a day honoring him. And on the subject of social justice, which Beck is currently castigating as some sort of Da Vinci coded proxy for Marxism, King once said…

“[W]e will be able to go this additional distance and achieve the ideal, the goal of the new age, the age of social justice.”

Contrast that with Beck’s twisted view on the matter. It begins with a warning that when you see the words social justice you should…

“Run, and don’t listen to anyone who is telling you differently. […] It is a perversion of the Gospel.”

I’m not sure where Beck acquired his theological training. Perhaps it was when he was an alcoholic drug abuser. Or maybe it was after he sobered up and became a Mormon because, as he admits, if he didn’t his then-girlfriend wouldn’t sleep with him. In any case, he now considers himself so authoritative on spiritual matters that he, and only he, warrants your attention and observance.

The distinction between Beck and King is important because Beck has appropriated an anniversary that is cherished by Americans who revere King and his works. Beck is holding a rally on the steps of the Lincoln Memorial in Washington, DC, on the anniversary of King’s “I Have A Dream” speech, which was delivered at the same location. The dark irony of Beck pontificating on that platform, on that day, is purely revolting. As is the prospect of his all-white army of paranoids desecrating the historical significance of King’s oratory there almost half a century ago.

Beck demonstrated his commitment to his version of social justice when he appeared on Bill O’Reilly’s show last week. The discussion turned to whether the government could regulate unhealthy behavior like excessive consumption of junk foods. Setting aside the fact that no one in government is proposing that, O’Reilly nevertheless asked Beck how he would deal with someone who had a heart attack due to such a lifestyle and who did not have insurance. Beck’s prescription? “Sucks to be him.”

Beck continued by saying that he would not pay for this person’s health care or treatment in an emergency room. O’Reilly, acting in the unfamiliar role as the voice of reason, told him that he was already paying for that. Whereupon Beck changed his tune and came out as an advocate of government regulation of personal behavior. Not just once, but three times:

“If you don’t want to work, or if you can’t work, well then you are on government assistance, well then I can now regulate your life.”

“If you are taking money. . .if you want to be a slave to the government, then they have every right.”

“So here is the deal, if you don’t have insurance and you need to take the government insurance, then the government has the right to regulate every aspect of your life. But leave the rest of us alone.”

There is so much wrong with this that it’s hard to know where to begin. Let’s start with the cruel insensitivity of Beck’s initial response that it “sucks” to have a heart attack and that’s just too bad for you. Go away and die. That isn’t just a denunciation of social justice, it’s sociopathic.

Then Beck mentions something about a “need to take the government insurance.” Of course, there is no such thing. When a patient is unable to pay for emergency treatment the cost is transferred to the medical facility and eventually to future patients in the form of higher rates for treatment and insurance. The current debate over health care reform has proposed a “public option,” but Beck opposes that (and everything else in the pending legislation) as socialism. What’s worse, he takes the utterly detestable position that anyone on public assistance surrenders his liberty to the state. He even uses the word “slave” to describe the status of such a person. Somehow, I don’t think that was an accidental racial reference.

What makes this particularly disgusting is that Beck has fiercely criticized the federal bailouts of banks and auto companies. Then, when the administration tried to assert some control over how those funds can be used (for instance, prohibiting the banks from using the taxpayers’ money for extravagant, undeserved bonuses), Beck complained that the government was interfering with a private business. So in Beck’s warped mind it is wrong to tell troubled corporations how to spend money they get from the government, but if you’re a private citizen undergoing an economic hardship the government can take ownership of you and “regulate every aspect of your life.”

I really can’t fathom how Beck justifies his contemptible callousness and hypocrisy. Corporations get billions in tax credits, trade subsidies, development incentives, etc., and all of that was before the bailouts. But they have no obligation to the taxpayers who provide it. Your Uncle Andy gets a few bucks for groceries and shoes for the kids and he is obliged to be the government’s slave. And even then he gets no medical care for himself or his family. Of course not. How could the government afford it after giving all those billions to the corporations and trillions more to pay for illegal and unnecessary wars?

That’s Glenn Beck’s version of social justice. It’s compassionless, hollow, and inhumane. Beck doesn’t deserve to walk the same earth as Martin Luther King, much less desecrate King’s memory by usurping the anniversary of his historic address. It was an address that spoke specifically of the obligation America owes to its citizens as promised in the Declaration of Independence and the Constitution. It was an address that foresaw liberty and justice for all:

That’s the difference between King’s full-hearted grace and Beck’s hardhearted arrogance. King had a positive vision of the goodness in humanity and a belief in what we can achieve together. Beck has faith only in self-interest and the privilege of the fortunate. Let’s hope that King’s vision prevails.

Addendum: Beck has generously supplied us with his definition of Social justice:

“Forced redistribution of wealth with a hostility toward individual property rights, under the guise of charity and/or justice.”

That explains a lot. If I defined kittens as blood thirsty killing machines, you can bet I would lead the opposition to kittens. Of course, I would be insane to have that definition, right Glenn? Glenn?