After only one day Fox News has already eliminated coverage of the Tea Party Cop Killers in Las Vegas who went on a murderous rampage Sunday. On Monday, Fox’s primetime programs (Bill O’Reilly, Megyn Kelly, and Sean Hannity) were silent on the subject except for four sentences on Kelly’s show.

On Tuesday morning’s edition of Fox & Friends, the curvy couch potatoes failed to mention Jerad Miller and his wife Amanda. Later, on Happening Now, Fox ignored the story entirely. Outnumbered also declined to report on the Millers, despite having guest co-host “doctor” Keith Ablow who has psychoanalyzed every criminal, politician, and other public figure this century (without ever examining, or even meeting, any of them). 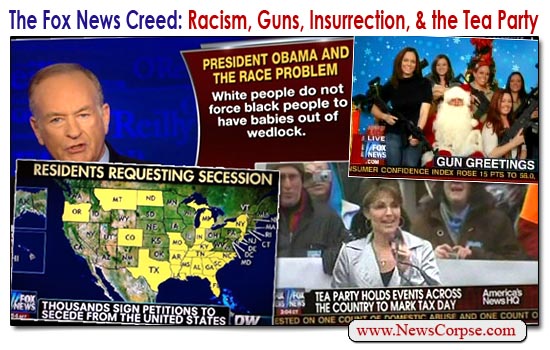 For more on the spurious Fox News Creed…
Get Fox Nation vs. Reality. Available now at Amazon.

Fox has replaced the Sunday massacre with older stories about the Bergdahl prisoner swap, the Veterans Administration, and Hillary Clinton’s book release and presidential aspirations. The producers and editors at Fox News have never been shy about reporting acts of alleged terrorism, even before any evidence has emerged. But for this story they have refused to even refer to the crime as terrorism. There are some obvious reasons why Fox would skew their reporting and ultimately remove this story from their news coverage. And all of them represent biases that are a long-standing part of what can be called the Fox News Creed.

First of all, the perpetrators are not who Fox’s racist producers typically profile as terrorists. Rather than being brown-skinned, Muslim, foreigners, the Millers are white Christians from Indiana. So not only would it run counter to Fox’s philosophy to implicate the Millers in terrorism, it would offend their 90% white, right-wing audience.

Secondly, the issue raises concerns about access to dangerous firearms. The NRA constituency at Fox is loathe to focus on such events that make the public uncomfortable with the wild west society that is favored by the gun fetishists and right-wingers who program and watch the network. Fox avoids or downplays most stories about gun violence, but jumps on any report that they can frame as an Obama attempt to repeal the Second Amendment.

Thirdly, Fox is well known for promoting some of the very same political ideologies as the Millers. They have featured guests who advocate secession from the United States, as well as armed resistance to federal law and authorities. An example of that is the recent Cliven Bundy affair where Jerad Miller just happened to show up threatening to use “the language of violence” against representatives of the Bureau of Land Management. Fox has also hyped Republican leaders, like Texas governor Rick Perry, who have made public statements that come just short of declaring secession.

Finally, the Millers’ association with Tea Party groups is something that Fox will work vigorously to excise from the public discourse. The Millers were supporters of the biggest Koch brothers-bankrolled Tea Party organizations (Americans for Prosperity and FreedomWorks), and openly espoused their anti-government views. It was only a matter of time before people who came to rallies with signs that said “We Came Unarmed – THIS TIME,” would keep their promise of violence. Of course, Fox News also supports the same groups and views, and has been instrumental in creating and promoting the Tea Party. In fact, there would be no Tea Party without Fox News. Consequently, Fox is not going to risk alienating such a critical part of their audience.

[Breaking] Further analysis of Fox’s coverage of the Tea Party Cop Killers was interrupted as this article was being written by the breaking news of yet another school shooting, this time in Oregon. This is the sort of tragedy that Fox can latch onto (briefly) because it lacks the political context of the Millers’ case. And the sensationalism of a breaking story is something that Fox will happily exploit.

In the meantime, Fox is probably glad to have something to report other than Sunday’s domestic terrorism in Las Vegas. The last thing they want is to have to acknowledge the relationship between the Millers and the the various enterprises that Fox News has endorsed and encouraged so feverishly. The Fox News Creed is one that was embraced by the Millers and, sadly, by many other viewers who Fox has worked so hard to deceive. And now they are reaping their reward in blood.

[Update:] As Fox returned to news other than the Oregon school shooting they continued to evade the Tea Party Cop Killers. The stories they have run so far on programs by Shepard Smith and Neil Cavuto on were on immigration, Sgt. Bergdahl, the IRS with an interview of Darrell Issa (Slimeball-CA), and extended, free campaign ads/interviews of Republicans Rick Snyder (governor of Michigan) and Ed Gillespie (senate candidate in Virginia). Following those programs, The Five was almost all Hillary Clinton, and Special Report with Bret Baier led with Bergdahl and then segued to bashing Clinton. It’s easy to see their editorial prejudices, but there was nothing (i.e. bupkis) on the Las Vegas Tea Party massacre.