In the ever paranoid and dystopian world of Glenn Beck, the burdens of tyranny are a constant aggravation for him. Being a persecuted white Christian male in a nation that abhors such creatures must cause him terrible distress. And what is it that he yearns for to bring him some small measure of relief? Nothing more than to be able to utter the words “fag” and “nigger” with the carefree abandon that he believes is his birthright. 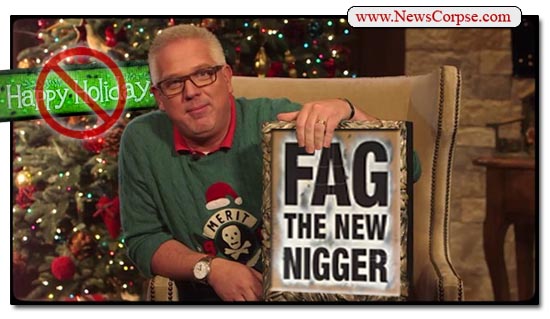 On an episode of his video blog Monday, Beck hosted a reprehensible street artist to share his artwork and political wisdom (video below). Sabo, who for some reason wants to remain anonymous and blurry (as if anyone cares what his identity is), regaled Beck with a variety of cheesy posters that took cheap shots at “libruls” and other enemies of America. For instance, he featured one where Texas candidate for governor, Wendy Davis, is mocked as “Abortion Barbie.” But one in particular caught the attention of Beck and launched a discussion about free speech and the Nazis in Washington.

Sabo’s ersatz poster simply had the words “FAG THE NEW NIGGER” written on it. As Sabo began to discuss the “art” he complained that…

“It bothers me you can’t say the name. I mean, we are such a politically correct environment that you can’t even say ‘fag the new nigger.’ Why is that?”

Exactly! And Beck responded forcefully saying that “It bothers me” too. What has this country come to that you are discouraged from using hateful epithets that are viscerally offensive to innocent people? All they want to do is run around saying fag and nigger to their heart’s content and society threatens to look down on them for it. And worse, they literally silence them (except for the fact that Sabo did actually say those words just as he was whining about not being able to, ironic obliviousness notwithstanding).

From there, Sabo waxed idiotic about long ago debunked conspiracy theories that claimed that President Obama is arming every federal agency from the FBI to Head Start with bullets and tanks in order to enslave American citizens. He saw an ominous parallel in this nefarious and non-existent activity:

“You’re almost seeing what happened in the beginning of World War II right in front of you and no one’s questioning the man because he’s black.”

It couldn’t be more similar. Obama has made health care available to millions of Americans who were previously denied. He has rescued the economy from the worst collapse since the Great Depression. He has advocated for the rights of women to have control of their own bodies. He ended two wars while keeping the U.S. homeland safe from foreign terrorists. See? He’s exactly like Hitler.

To be fair, Sabo did concede that Obama hasn’t done anything like Hitler – yet. And all that Sabo wants is to make sure that Obama doesn’t fulfill his desire to become the next Hitler. Who could argue with that goal? Certainly not Beck. In fact Beck applauds the paranoid artist and agrees wholeheartedly. He wishes there were more like him. That might help to change the social environment to allow the use of more racial epithets.

Although it is a little confusing that Beck is so perturbed by what he regards as restrictions on his right to free speech. This is the same guy who puts on a cavalcade of outrage every year after Thanksgiving if somebody should dare to wish him a “Happy Holiday.” He has warned his disciples to “run as fast as you can” if their church should ever utter the phrase “social justice.” And he has a whole lexicon of evil words associated with the United Nations plot to force everyone into a One World Government dictatorship. So Beck’s list of verboten language is as long as his arm, but if anyone tries to stop him from spewing vile racial slurs, watch out. That’s an affront to his warped notion of liberty.