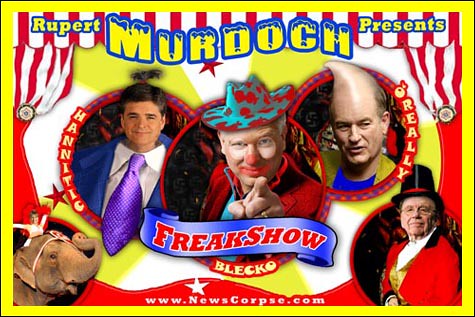 Last month I wrote an article detailing some suspicious activities and histories of Rupert Murdoch and his News Corporation, and their relationship to the monopolistic survey group, Nielsen Media Research. The article was titled, Fox News Caught In Massive Nielsen Ratings Fraud. It should be noted that the publish date for the article was April 1, 2010. It is important to recognize the traditional significance of that date when evaluating the content of the article.

The purpose of this update is to respond to ongoing interest in the subject matter. The article has been circulating the Internet via links from prominent media players, including Roger Ebert and Alan Colmes’ LiberalLand. So I thought I would take this opportunity to clarify a couple of points and to offer some analysis of the response.

First of all, despite the “first day of April” publication, the article’s primary factual assertions are true and documented. Fox News did object to early iterations of Nielsen’s then-new People Meter technology. News Corp did have a prior business relationship with the manufacturers of Nielsen’s set-top ratings collection devices. News Corp was connected to corporate espionage and sabotage, which was reported by Wired Magazine. News Corp did make payoffs to certain parties to suppress a scandal involving email hacking and other violations of privacy of public figures, which was reported by the Guardian. And Rupert Murdoch is enmeshed in a tangled web with businesses and government agencies and leaders in communist China, as reported in Esquire.

The foregoing factual basis for my column notwithstanding, the headline and conclusions were squarely in the grand tradition of the day upon which April begins. Nevertheless, many readers approached the whole of the article with a seriousness that was only partly intended. To me this illustrates an inherent distrust of ratings data, as well as an eagerness on the part of the public to accept any plausible allegation of deceit or misconduct on the part of the media. I would have to concur on both points. Indeed, those points were the primary motivation for my writing the article in the first place.

The very real problems with Nielsen data are well-known and ongoing. They employ a methodology that is archaic and unreliable. It’s so bad that their biggest customers repeatedly attempt to fund alternative data providers. The latest effort is the Coalition for Innovative Media Measurement. This group was formed last August by 14 big media enterprises including NBC Universal, Time Warner, News Corp, Viacom, CBS, Discovery and Walt Disney. At the time of the announcement I expressed skepticism that it would yield any positive results. Every other attempt to undermine Nielsen’s supremacy has ended badly for the new venture. The failures were due primarily to infighting amongst the coalition members and their self-serving pursuit of parochial concerns.

The CIMM does not appear to be faring any better than their predecessors. While it may be too soon to write them off, there does not seem to be any substantive progress outside of an initiative to agree on common definitions of research terms. The creation of an industry lexicon is hardly forward progress. And the companies that have some of the best data aggregation technology (i.e. cable operators, TIVO, etc.) have so far declined to participate. The CIMM is months away from producing any tangible results, and when they do you can expect sparks to fly as member companies find fault with what the coalition delivers.

As for Fox News, their recent ratings performance has not supported any conspiracy theory alleging cheating on their behalf. Their most recent quarterly numbers showed a harrowing 20% viewer exodus. Their star attraction, Glenn Beck, lost a third of his audience since January, along with many of his advertisers. But maybe this is just a ruse to calm the suspicions that are swirling around them. If their ratings decline temporarily, everyone will assume that they aren’t tampering with them. Then, when the heat’s off, they goose them right back up on demand. What a devious plot they are contriving. No one wonder no one trusts them.

4 thoughts on “UPDATE: Fox News, Nielsen Ratings, And Trust In The Media”