This week saw the release of the quarterly ratings performance data for television programming. Much of the reporting on this story focused on the dominant position Fox News retains in the cable news sector. As has been the case for several years, Fox News smothered the competition and experienced rapid growth while other news programmers stagnated or declined.

While most industry insiders accept the routine pronouncements from the sole ratings provider, Nielsen Media Research, without question, some observers could not help but notice a certain incongruity in the results. How is it, they wonder, that Fox News can be so consistently in the lead despite their obvious niche programming focus on a narrow segment of the viewing audience. The decidedly right-of-center bias of Fox News corresponds to a rather small portion of the national electorate. Republican favorability has been hovering in the mid-twenties for years. So how does this negligible slice of the market translate into such a disproportionate ratings advantage?

The answer may be evident in new disclosures of business relationships that call into question the integrity of Nielsen’s data. With the rollout of its People Meter methodology in the early 2000’s, Nielsen entered the high-tech era of TV market research. It was heralded as a major advancement of data collection that would vastly improve the ability of producers, programmers and advertisers to evaluate the marketplace. But as with any upheaval in the status quo, there were skeptics and dissenters. Chief amongst them was Fox Broadcasting, who argued that the new system significantly under-counted African-Americans, a key component of their audience at the time. There was also a question as to the security of the new set-top boxes that would be recording viewer choices. With the introduction of technology comes the risk of miscalculations and tampering. But eventually the complaints receded or were resolved and the new service took its place as the signature survey product for television marketing.

It was during this time, subsequent to the implementation of People Meters, that Fox News began its rapid ascent to ratings dominance. A prudent observer might wonder how this new system came to report so much more favorably for a network that had fiercely opposed its adoption. What transpired that caused Fox News to withdraw their objections and become the biggest beneficiary of the change?

It has recently been discovered that the Wegener Corporation, the manufacturer of the set-top devices that Nielsen uses, has a long association with Rupert Murdoch and the News Corporation, the parent of Fox News. Wegener was founded by the former management of Scientific-Atlanta, a producer of set-top boxes for cable access and other purposes. One of the other products in Scientific-Atlanta’s line was a device used by Gemstar to provide television program listings to cable operators and their subscribers. Gemstar was an affiliate of TV Guide, which in turn was owned by Rupert Murdoch’s News Corp. So the executives who were responsible for developing and manufacturing Murdoch’s equipment for Gemstar became the principles of the company providing Nielsen with their ratings collection devices. And around that same time Fox News dropped their objections to the new People Meter service.

It would not be difficult to encode an electronic device so that it would purposefully miscalculate survey data. A simple algorithm to multiply a target by a fixed percentage could produce a result that would artificially inflate one set of figures while keeping it in proportion to a larger set, making it virtually impossible to detect. At present, their is no confirmation that such a deception has been contrived. It would require a thorough examination of Nielsen’s hardware and the ability to reverse engineer the chips inside of it. But for those who presume that it would be an outlandish notion, they would be well advised to study recent news events that uncovered similarly scandalous conduct on the part of News Corp.

One situation involves a digital recorder and satellite receiver made by NDS Group for Murdoch’s Sky network in Europe. Unlike TiVo, the Sky+ system records “personal viewing information,” which is information about your viewing practices that is tied to your contact information (i.e., it’s not kept anonymous, like TiVo’s).

In addition to that, NDS was also charged with using spies and hackers to steal Sky competitor Dish Network’s programming and make it available to viewers for free, thus undercutting Dish’s financial viability. As reported in Wired Magazine:

“The case involves a colorful cast of characters that includes former intelligence agents, Canadian TV pirates, Bulgarian and German hackers, stolen e-mails and the mysterious suicide of a Berlin hacker who had been courted by the Murdoch company not long before his death.

On the hot spot is NDS Group, a UK-Israeli firm that makes smartcards for pay-TV systems like DirecTV. The company is a majority-owned subsidiary of Murdoch’s News Corporation. The charges stem from 1997 when NDS is accused of cracking the encryption of rival NagraStar, which makes access cards and systems for EchoStar’s Dish Network and other pay-TV services. Further, it’s alleged NDS then hired hackers to manufacture and distribute counterfeit NagraStar cards to pirates to steal Dish Network’s programming for free.”

On yet another occasion Murdoch’s news group engaged in some sleazy and illegal behavior to get stories about celebrities and politicians. The Guardian reported that Murdoch paid substantial sums of money to keep this scandal under wraps:

“Rupert Murdoch’s News Group Newspapers has paid out more than £1m to settle legal cases that threatened to reveal evidence of his journalists’ repeated involvement in the use of criminal methods to get stories.

And if that’s not enough, check into the incestuous and disturbing web of connections Murdoch has to the communists in China. Glenn Beck tried to pull the veil off of this one but was censored by his own employer. 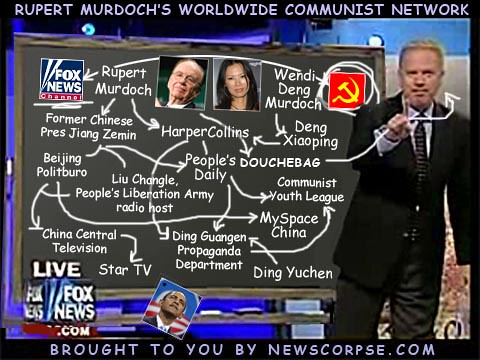 Given the history of sleazy conduct and nefarious associations, is it really that far-fetched to conclude that something similar has taken place with regard to Murdoch’s relationship to Nielsen and the firm that manufactures their ratings collection devices? It would explain how Fox News could wind up with such a dominate lead in the ratings despite catering to a relatively small potential audience. It would explain why Fox suddenly halted their objections to a new process that they previously considered inaccurate and biased against them.

It would also explain a deep discrepancy between the allegedly broad viewing of Fox News and their nearly invisible impact on the political landscape. If Fox were as ubiquitous as they (and the ratings) claim, then why, during the years of their strongest growth, did they fail to move the country to their positions. With a sustained 24/7 propaganda effort, Fox failed to stop the 2006 Democratic takeover of Congress. They failed to stop the 2008 election of Barack Obama despite incessant and false allegations of him being a Muslim, a radical leftist, and a pal of terrorists. They failed to stop the 2010 passage of a health care bill despite charges of socialism, death panels, and national bankruptcy. Does this sound like a network that holds a commanding majority of America’s television viewers under its sway?

To be sure, I am not the first to question the legitimacy of Nielsen’s numbers. Many people in the industry quietly accept what they regard as a flawed methodology simply because there is no alternative – or because proposed alternatives are even less acceptable. When it suits their purpose, even Fox News complains about the ratings. And I’m not talking about simple complaints concerning minor numerical inconsistencies, but allegations of rampant fraud that warrant federal investigation. After basking in the glow of Nielsen’s data, Bill O’Reilly turns around and castigates them as having “major problems…that have benefited MSNBC,” and asserts that…

O’Reilly: “The bottom line on this is there may be some big-time cheating going on in the ratings system, and we hope the feds will investigate. Any fraud in the television rating system affects all Americans.”

Of course the “feds” don’t have any jurisdiction over private market research firms. And it’s rather hypocritical for O’Reilly to suddenly advocate for big government intruding on the free market. But conservatives like O’Reilly are not averse to hypocrisy when it furthers their agenda. And in this case the agenda is to work the refs at Nielsen and suppress any notion that Fox is not the king of the television hill.

In conclusion, if we are to have any certainty as to who the real king of the hill is, we will need to get to the bottom of this lingering controversy surrounding Nielsen’s systems and procedures. The connection to Murdoch’s covert operations and his history of unlawful corporate espionage cannot be dismissed. Nielsen must investigate their equipment providers and perform intensive examinations of the devices they place in viewers’ homes. Anything short of this would leave them open to charges of complicity and render their survey data useless.