Last week Fox News and their Republican cohorts went berserk over reports that Abu Bakr al-Baghdadi, the leader of ISIS in Iraq, was a former prisoner at Guantanamo Bay but was released by Obama. That happens to be another Fox manufactured lie, but that didn’t stop them from promulgating it repeatedly. 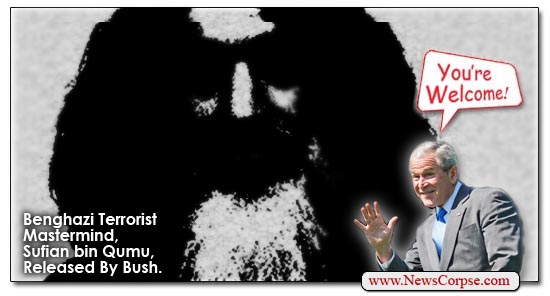 This week Fox News broadcast a report that has a similar revelation buried deep in a story notable for an unrelated, but equally disturbing. bit of disinformation. The article was about the captured Benghazi suspect Ahmed Abu Khattala, who has generally been regarded as a leader of the terrorist militias in Libya. At least until he was was apprehended by U.S. military forces under Commander-in-Chief Barack Hussein Abu Obama Bin Kenya (as he is known to Fox News and their viewers). Suddenly, Khattala has been transformed from a ringleader to a bit player and, according to Fox’s anonymous sources, “low hanging fruit.” The exchange on Fox between anchor Martha MacCallum and reporter Adam Housley went like this:

MacCallum: Is he really believed to be the mastermind behind this night?

Housley: Well, it depends on who you talk to, Martha. When you talk to the administration they’ve touted this as being a big get for them, a big win for them as well. When we talk to those having direct knowledge of this from the very early days, they’ll tell you that Khattala really wasn’t that big of a deal at all.

What’s more, the contention that Khattala was a mere pawn is one that has only emerged after his capture, presumably as an effort by Fox to avoid ever giving credit to Obama for anything that might be perceived as positive. However, before Khattala was nabbed he was considered to be a dangerous honcho in the top ranks of the terrorist infrastructure. Back on January 8, 2013, none other than Fox News super-pundit Charles Krauthammer had this to say about Khattala (@5:20 in the video):

“We know the leader of the attack was a certain, Ahmed Abu Khattala, who was seen a few days later in a coffee shop outside Benghazi.”

That was the Fox view a year and a half ago when they were still bashing Obama for not having arrested anyone. So if Khattala is not the Benghazi leader as Krauthammer said, then who was? Well, buried in Housley’s report is the answer. it was one Abu Sufian Ibrahim Ahmed Hamuda bin Qumu:

“He was a prisoner at Guantánamo Bay for more than five years and at the time was classified by analysts at the prison as ‘a probable member of Al Qaeda.’ Despite this significant threat to American security and allies, bin Qumu was released as part of an amnesty for militants in 2008.”

Actually, Housley’s facts are a bit muddled. Bin Qumu was released from Gitmo in September of 2007, and handed over to Libyan leader Muammar Gaddafi. It was Gaddafi who, in 2008, declared an amnesty and released bin Qumu and other Libyan prisoners. Either way, it was the Bush administration who sent bin Qumu home where he eventually took command of the militia that Fox News now says orchestrated the Benghazi attack and the murder of four Americans, including Ambassador Chris Stevens.

If bin Qumu had been released from Gitmo while Obama was president, you can be sure that Fox News, and a horde of wild-eyed Republicans, would be aghast at such a treasonous breach of judgment and law, and would be calling for his impeachment (again). That is, after all, precisely the way they reacted to the false accounts of Baghdadi’s release. But since bin Qumu gained his freedom thanks to President Bush, Fox will never mention it outside of incidental references like Housley’s, which was probably an oversight.

Reporting like this is a revealing window into the dishonesty that infects virtually everything that Fox News does. In this one story they contradict their previous analyses of Khattala as the ringleader of Benghazi and demote him to foot soldier. At the same time they expose the Bush administration as being responsible for the release of the real Benghazi mastermind, but mention it only in passing and leave it utterly unexamined in any credible manner. And that’s how propaganda is done.

One thought on “UH-OH: Bush Released The Real Terrorist Mastermind Of The Benghazi Attack”