In yet another example of journalistic malpractice, the folks at Fox News broadcast a number of reports that got the most significant facts completely wrong. In order to do so, they relied on the assertions of a single, uncorroborated account, and failed to do the most basic follow-up with the people in a position to know. 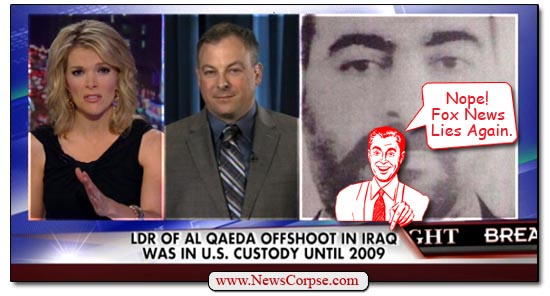 The latest lie-riddled reporting on Fox concerned the circumstances of the capture and release of Abu Bakr al Baghdadi, the leader of the terrorist group, Islamic State of Iraq and Syria (ISIS). Fox and other conservative media outlets are endeavoring to place the responsibility for Baghdadi’s brutal march through Iraq on President Obama. Representative commentaries include these by Fox hosts Jeanine Pirro and Megyn Kelly:

Pirro: The head of this band of savages is a man by the name of Abu al-Baghdadi. The new Osama Bin Laden. A man released by Obama in 2009, who started ISIS a year later.

Kelly: We are also learning more about the leader of the terror group, a man described as the new Bin Laden, the heir to Bin Laden. It turns out he had been in U.S. custody until 2009, over in Iraq, when he was then turned over to the Iraqi government as part of our troop drawdown. And then he was released.

On Pirro’s Saturday program she led into the subject with a mouth-foaming harangue about Obama’s “feckless” leadership and socialist designs on America. On Kelly’s primetime program she interviewed Col. Kenneth King who claimed to have been present when Baghdadi was transferred from the custody of U.S. forces to the Iraqis, who later allegedly released him to go on to form ISIS. However, an investigation by PolitiFact uncovered a very different story, confirmed by the Defense Department, and branding the Fox report as “false.”

“Ibrahim Awad Ibrahim Al Badry, also known as ‘Abu Bakr al-Baghdadi’ was held as a ‘civilian internee’ by U.S. Forces-Iraq from early February 2004 until early December 2004, when he was released,” the Pentagon said in a statement. “He was held at Camp Bucca. A Combined Review and Release Board recommended ‘unconditional release’ of this detainee and he was released from U.S. custody shortly thereafter. We have no record of him being held at any other time.”

Since the right-wing is so intent on assigning blame for Baghdadi’s campaign of terror on the president who was in office when he was set free, then according to their logic it is all Bush’s fault. But don’t expect Fox News to report the facts as laid out by actual journalists. They won’t even report the comments of their own witness, Col. King, who appeared on another network (ABC) and admitted that he “could be mistaken.” It turns out that he never knew the name of the man he presumed to be Baghdadi, he just thought there was a resemblance to the man he encountered. Nor will they report Col. King’s remarks to the Daily Beast where he downplayed the threat posed by Baghdadi, saying that “He was a bad dude, but he wasn’t the worst of the worst.”

PolitiFact went on to note that, even if Col. King’s account were correct, and Baghdadi was still in custody in 2009, Obama still could not be held to blame for Baghdadi’s release. The terms of the Status of Forces Agreement with Iraq required the U.S. to turn over all prisoners to the custody of Iraq’s criminal system. That agreement was negotiated and agreed to by the Bush administration in 2008. 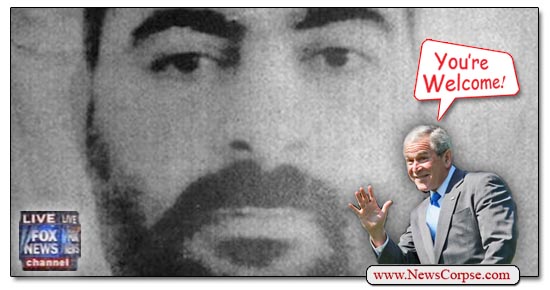 So virtually everything reported by Fox News was wrong. And, not surprisingly, all of the misinformation leaned toward blaming President Obama for the mistakes of President Bush. It’a pattern that is all too familiar. Now that the truth has been revealed and confirmed, we can expect Fox to issue a correction at the earliest opportunity. And if you believe that you are probably already a dimwitted, gullible disciple of the Fox Disinformation Society.

44 thoughts on “FACT CHECK: ISIS Leader, Baghdadi, Was Released By Bush, Not Obama”