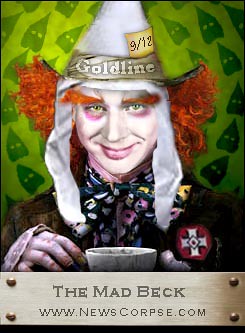 With God as my witness, I thought turkeys could organize a rally. Even Glenn Beck. But as it turns out his plans may end up crashing to the ground.

For several months Beck has been promoting a rally in Washington, DC. It was originally announced as the launch party for his upcoming book, The Plan, a blueprint for the next 100 years in America. He later fundamentally transformed the event into a tribute to the military, although he stipulated that no funds would go to the designated charity until after his rally was paid for. Most recently he responded to protests that his event is on the same date, and at the same location as Martin Luther King’s “I have a Dream” speech, by asserting that he would be honoring Dr. King.

Well, never mind all of the alleged purposes of the rally. It seems it may not even take place. According to Bill Press, who contacted the National Park Service, Beck failed to secure a permit for his multiple-personality party:

“At this point, according to [Bill] Line [of the NPS], no final permit has been awarded for the August 28 event. The permit is still pending, and may not in fact be approved.”

Perhaps this isn’t an act of hysterical incompetence. Maybe Beck deliberately ignored the permit requirement to demonstrate his commitment to smaller government and deregulation. I can hear him now, wailing to the wind that “We don’t need no stinkin permit.” Who does the Park Service think they are granting permission to use these public grounds?

The Tea Bagger Bureaucrats aren’t having a very good week. A few days ago the Tea Party convention scheduled for mid-July in Las Vegas was postponed to an unspecified date in October. The reasons given were a fairly transparent basket of malarkey, as I observed here.

I guess we’ll just have to wait and see if Beck gets his permit and pulls off his shape-shifting affair. At least we know that he won’t be there alone, as some bona fide civil rights leaders are now pledging to hold counter demonstrations and have even announced another event on October 2nd, for which I am willing to bet they will have a permit.

The Park Service is generally averse to controversy, so I would be surprised if they end up denying Beck’s permit. However, they may reconsider if there is some reason to suspect the event might be provocative or if the organizers misrepresented it.

Perhaps we can help by calling the Park Service and pointing out the problem with the charity. Here’s their phone number: (202) 208-3818.