Now that Glenn Beck has an honorary degree from Jerry Falwell’s Liberty University, he has proceeded to the next plateau of academia by opening his own institution of higher learning: Beck University.

There will be no application process for aspiring students. All that’s needed is a credit card. After all, it would hypocritical for Beck, a college dropout, to impose strict academic standards on others. He’s already crossed the line by railing against school programs that give students awards for doing nothing, after he accepted an honorary degree that he plainly did not earn. According to Beck’s web site, BU’s curriculum will be…

Offered exclusively to Insider Extreme subscribers, Beck University is a unique academic experience bringing together experts in the fields of religion, American history and economics. Through captivating lectures and interactive online discussions, these experts will explore the concepts of Faith, Hope and Charity and show you how they influence America’s past, her present and most importantly her future.

From all appearances, this seems to be little more than a sales pitch for Beck’s premium Internet service. The subjects of study are staples of his TV program that have been rerun more often than episodes of “I Love Lucy.” And the “experts” he has assembled are the same characters he frequently trots out on his show. They are also fellow Mormons, adding to the evangelical agenda of BU. 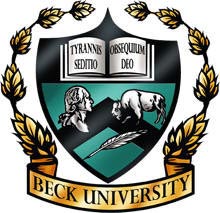 I assume that Beck University has been accredited as a remedial institution to cater to his notoriously slow and gullible audience. It’s more likely to be a form of reeducation that replaces actual facts about history and economics with the fabricated conspiracy theories for which Beck is so well known.

Beck is serious enough about this college that he had a school emblem created, presumably for the pockets of his school uniforms. The emblem features the Latin text: “Tyrannis Seditio – Obsequium Deo.” As close as I can figure it has something to do with rebelling against tyranny and obedience to God. It says nothing about education.

It sounds to me more like a slogan for a faith-based militia. And since we know that Beck considers Obama to be a tyrant, it would serve well as the credo for his army of hysterical seditionists. It sort of makes you wonder just what Dr. Beck is planning.

Update: This guy wants to run a university? 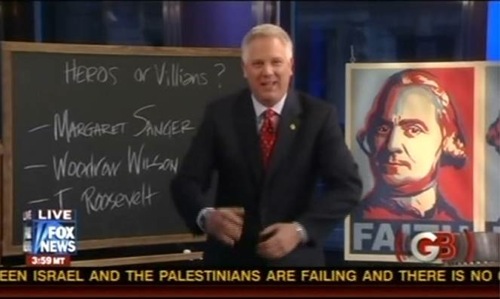 Notice the spelling of “Heroes or Villains.” He’s gonna turn out some pretty sorry students. Although to attend BU they would have been pretty sorry to start off with.