The attempt by Fox News to manufacture a phony version of events leading up to the terrorist attack in Benghazi continues at full speed. The latest chapter in their fictional tale revolves around court documents released by the Department of Justice in a pretrial motion to secure the detention of suspect Ahmed Abu Khatalla. The report by Fox News begins with the allegation that…

“Court documents filed by the U.S. Justice Department in the criminal case against Benghazi attack suspect Ahmed Abu Khatallah provide unprecedented details about the evolution of the assault and further shatter the Obama administration’s initial claim that it sprouted from protests over an anti-Islam film.” 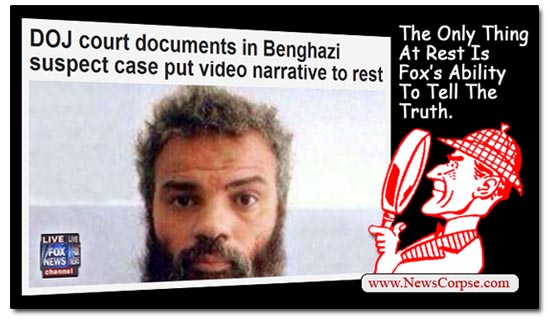 The problem with Fox’s reporting is that nothing in the rest of their story supports the charge in their opening paragraph. Not only is there nothing that shatters the claim that an anti-Islam video played a part in the violence that night, there isn’t any reference to the video at all. There is no assertion that the video was a trigger for the attack, and no assertion that it was free of some responsibility for motivating the attackers.

A possible reason for there being nothing conclusive regarding the video is that the court documents referenced by Fox were merely a motion presenting the state’s arguments for maintaining Khatalla in custody while awaiting trial. The purpose of this motion is solely to establish that the defendant is a flight risk and a potential danger to the community. It does not pretend to include every bit of evidence or testimony that will be presented in court.

Nevertheless, Fox sought to portray the motion as containing material that it simply does not contain. That’s why the article never bothers to quote anything from the motion that supports the contention that the video narrative was put to rest. The best they could do was to say that…

“The motion says that in the days preceding the attack, the defendant ‘voiced concern and opposition to the presence of an American facility in Benghazi.'” [and that] “The motion filed this week said Khatallah ‘was motivated by his extremist ideology.'”

There’s no surprise there. The defendant, after all, was a leader of the anti-Western extremist group, Ansar al-Sharia. Of course he was opposed to the American presence on Benghazi. That, however, doesn’t negate the possibility that Khatalla’s plans to attack the diplomatic facility may have been inspired by, or opportunistically coordinated to, the numerous protests that were occurring simultaneously throughout much of the Middle East that were directly the result of the anti-Islam video.

What Fox fails to mention in their story is that Khatalla himself is reported to have admitted that the Benghazi attack was revenge for the video. According to the New York Times…

“What he did in the period just before the attack has remained unclear. But Mr. Abu Khattala told other Libyans in private conversations during the night of the attack that he was moved to attack the diplomatic mission to take revenge for an insult to Islam in an American-made online video.”

Fox’s reporting on this is all over the map. Aside from their obsessive fixation on the issue as a cudgel with which to pummel President Obama, Fox has previously labeled Khatalla the ringleader of the Benghazi attack, only to demote him to an irrelevant foot soldier after his capture.

What this tells us is that the value of any element of this story to Fox News is determined solely by its ability to reflect negatively on the President. Consequently, anyone who buys into anything that Fox says is being deliberately and willingly deluded.