Today is the ninth anniversary of the launch of News Corpse. It has brought great satisfaction exposing the deceit and inbred hatred of the right-wing media for these past nine years. On the other hand, it has brought great frustration that such unethical miscreants continue to distort the truth in pursuit of their extremist, uber-conservative agenda. On the other hand (that’s three hands so far if you’re counting), the wingnut press is a bottomless pit of material for satire and mockery. 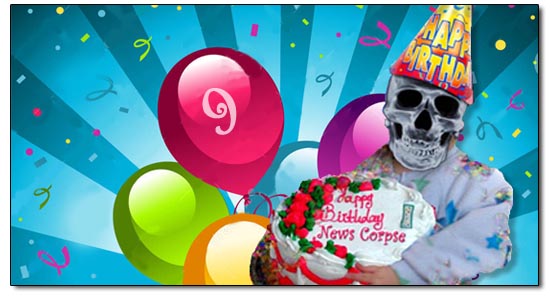 For any of you who wish to give News Corpse a birthday present, you can buy our book, Fox Nation vs. Reality: The Fox News Community’s Assault On Truth, on Amazon. Or you could dump your Tea Party, KeystoneXL, GOP funding, mobile phone providers (i.e. AT&T and Verizon) and switch to the progressive cell phone service, CREDOMobile Be sure to use the special offer code “newscorpse”, for which we will receive a modest commission. Both presents will be a gift for you as well.

Fox News is engaging in a peculiar manner of celebration this Independence Day. Their Fox Nation website decided to display their patriotism by posting an editorial by impeachment advocate, and Fox senior legal analyst, Andrew Napolitano, that declared that America has “Gone From An Inherited Tyrant To An Elected One.” Hooray for the USA!

Over on the Fox News website they featured an article by Dan Gainor, the VP of the ultra-rightist propaganda factory, the Media Research Center. Gainor’s column was headlined “July Fourth: Be especially proud to be an American in 2014.” It was long discourse that covered many subjects, but left out just one: Any reason to be especially proud. Gainor just ranted about the evils of liberals and President Obama. For example, note these excerpts:

Richard Mellon Scaife died. Scaife was the media baron who spent a lifetime attacking Democrats, and particularly the Clinton family who he accused of everything from drug-running to murder. He was an early and aggressive advocate of Clinton’s impeachment. He was 82.

Disgusting, hate-filled, Tea Party, racist, protesters continue to camp out at the site of a Murrieta, California, facility where immigration officials are hoping to temporarily house women and children while being processed. These pseudo-patriots are actually impeding the authorities from completing deportation proceedings, and at the same time they are subjecting the children to terrifying experiences and forcing them into unsafe, overcrowded facilities. What a wonderful way to spend the Fourth of July and honor these words:

Not like the brazen giant of Greek fame,
With conquering limbs astride from land to land;
Here at our sea-washed, sunset gates shall stand
A mighty woman with a torch, whose flame
Is the imprisoned lightning, and her name
Mother of Exiles. From her beacon-hand
Glows world-wide welcome; her mild eyes command
The air-bridged harbor that twin cities frame.
“Keep, ancient lands, your storied pomp!” cries she
With silent lips. “Give me your tired, your poor,
Your huddled masses yearning to breathe free,
The wretched refuse of your teeming shore.
Send these, the homeless, tempest-tost to me,
I lift my lamp beside the golden door!”

Finally, let’s all wish this beautiful young woman the very happiest Sweet Sixteen ever. That’s right, Malia Obama is a real Yankee Doodle Dandy who was born on the Fourth of July. 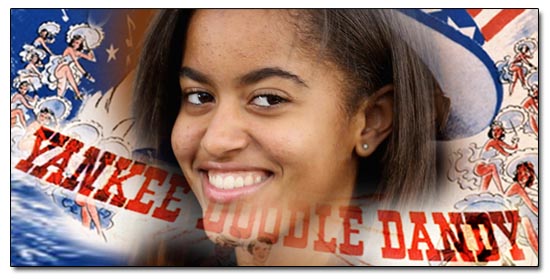 One thought on “Happy Birthday News Corpse – And America. Plus: See How Fox News Dishonors This Holiday”