The border wars continue on Fox News as the network repeatedly portrays the immigration issue in partisan terms and likens the influx of immigrants to an “invasion” or a conspiracy by President Obama to mint new Democratic voters.

In another new escalation of their radical rhetoric, Fox News is now heralding the participation of right-wing militia organizations who say that they will take it upon themselves to patrol the southern borders (funny that they are never concerned with any other border), an activity for which they have no legal authority.

The Fox Nation website is currently featuring an article that promotes a positive impression of violent and racist extra-legal militias that they describe as “defenders” of the U.S. border saying that…

“We have independent units from the Bolinas Border Patrol and the Central Valley Citizens militia joining forces with independent citizens militia units of Texas to defend our southern border in Texas, to protest Obama’s lawless open borders policies and to rally support for Governor Perry to officially call out Guard units and Texas militia units at his disposal to defend the border!! Lawsuits will not cut it. The invasion is happening now. Action must be taken NOW!!” 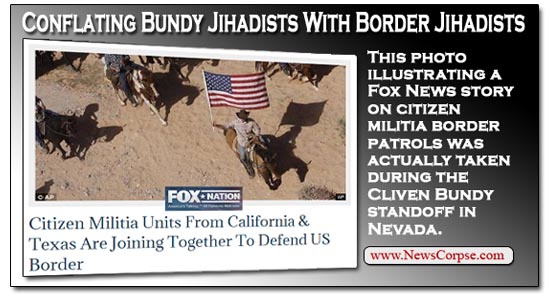 These border jihadists have no official authorization to conduct the activities that they have announced. Any harm that might come to themselves or others would constitute criminal misbehavior for which they could be prosecuted and punished. Their hollow exclamations of lawlessness on the part of the federal government are completely without merit and they offer no argument to support their claims. Contrary to the charge of “open borders,” the Obama administration has significantly improved border security and has actually intercepted and deported more immigrants than their predecessors in the Bush administration.

None of that gets in the way of promulgating false and hysterical allegations that are designed to incite racial disharmony among the Fox News Chicken Littles who see this administration as a sign of the Apocalypse. It is a call to battle in the Texas territories that the righteous must heed, just as they did up in Nevada where deadbeat rancher Cliven Bundy amassed militia groups to stare down federal law enforcement agents. That incident ended in a moment of candor with Bundy revealing his racist tendencies and a couple of his former associates murdering two police officers in Las Vegas.

Just to make sure that the message sent to the militia brigades is not misunderstood, the photograph that Fox Nation used to illustrate their border defense jihad was actually taken during the Bundy ranch standoff. It is telling that Fox would use this photo to represent events at the border when it wasn’t taken there. And it is journalistically unethical to do so without proper disclosure. This is a not-so-subtle attempt to interweave the Bundy affair with this new group of lawless missionaries. So even though Bundy was discredited and abandoned after flaming out in the Nevada desert, Fox News is still peddling the agenda of insurrectionists who believe that they can take the law into their own hands.

The ignorance required to link immigration to an invasion is substantial. Invaders are overtly hostile enemy assailants who seek to overthrow the target of their attack. However, no one disputes that immigrants are drawn here by their reverence for American values and opportunities. They are not enemies advancing to conquer. They were invited by the words engraved in brass at the base of the Statue of Liberty: “Give me your tired, your poor, your huddled masses yearning to breathe free.”

With regard to the alleged voter creation conspiracy theory nonsense, even the most liberal interpretation of the immigration policies currently being discussed would require new residents to have been in the U.S. since childhood and to have completed high school or be serving in the military. Additionally, they would would have to pay all taxes and penalties and go to the end of the line to qualify for citizenship. All told it is estimated that it would take about thirteen years to become a citizen with voting privileges.

Unfortunately, the themes being hyped by Fox News are being echoed throughout the conservative media circus. The extremists and wackos who inhabit that realm are eagerly latching on to this new cause for panic. And the possibility of it producing another tragedy similar to the one that cost two Las Vegas police officers their lives is ever more likely.

Let’s hope that doesn’t happen, but with accomplices like Sean Hannity and Rush Limbaugh treating violent criminals like heroes, we may not have seen the worst of this yet.