The tragic downing of a civilian aircraft in Ukraine has opened a window on a peculiar phenomenon that emerges whenever there is an event, anywhere in the world, that has some international significance. The spotlight that this particular event casts is instructive because of the specific details and how they relate to the global distribution of obligations.

Let’s begin with the fact that the plane that was shot down was owned and operated by Malaysian Air. The passengers were from many nations, but mostly the Netherlands. There was only one American on the flight. The attack occurred along the eastern border of Ukraine on a flight path through Europe and Southeast Asia. And the perpetrators were almost certainly pro-Russian separatists with help from Russia itself. 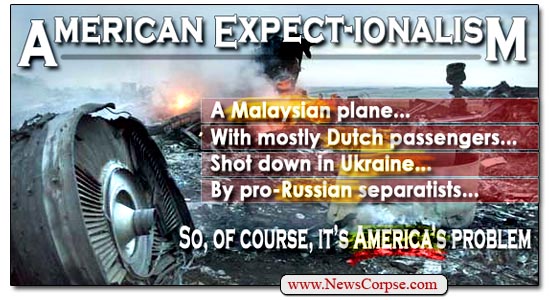 So obviously it is up to the United States to take control of the situation and resolve all of the mysteries and criminal conspiracies that arise. It is expected of us. Never mind that there is almost no direct American connection to the attackers or the victims.

Conservative American politicians and pundits have been vocal in demanding that President Obama assume a leadership role in investigating the affair and punishing those responsible. Some have harshly criticized him for not being more aggressive. John McCain positioned himself in front of every TV news camera he could find to imply that Obama has been derelict by not imposing stiff sanctions in advance of possessing all the facts. McCain was joined by several other hyperactive Republicans whose advice ranged from empty rhetoric to declaring war on Russia.

One of the worst reactions from the press was from Fox News (surprise) anchor Jeanine Pirro. She launched into a tirade that called for the President to “put on his big boy pants.” Her venomous spew could only be interpreted as a call to arms. She had the audacity to cite Vladimir Putin as an example of the virile leadership she advocates. The very same Putin who is likely complicit in the jet attack. Pirro’s other example of manliness was Israeli Prime Minister Benjamin Netanyahu, who she admires for his deployment of 50,000 troops in Gaza. In both cases she is clearly expressing her fondness for military involvement and her opinion that no other response is sufficient. What’s more, she falsely projects her bloodlust unto the American people by claiming that…

“Americans don’t want a spectator, they want a leader who’s also not kidding around. Americans want a president not afraid to get in the game, secure our future and re-assert himself on the world stage.”

Actually, Americans have made their views known in recent polling, and they do not agree with Pirro’s assessment of them. Only 17% of those polled said that the U.S should do more to counter Russian aggression in Ukraine. Furthermore, only 23% favor continuing a military presence in Afghanistan, and only 19% want us to go back to Iraq. Pirro obviously has her finger on the pulse of some other country, because she really doesn’t understand Americans.

Pirro’s lament included the already debunked comparison of Obama’s response to the Ukraine incident and Ronald Reagan’s response to Russia shooting down a Korean airliner in 1983. It’s just another of her detours from the real world. Although she is consistent in that she advocates for American military intervention in Iraq, Syria, and Israel, in addition to Russia. That’s what the macho man in her feverish fantasies would do. And after defeating Putin and Assad and various factions of Al Qaeda, he would carry her off to his Fortress of Solitude.

There is no question that the United States has a role in the world that includes varying degrees of intervention. But a wise leader would always exhaust every diplomatic measure available before committing to warfare. The U.S. currently has a great many options that include diplomacy, economics, and international pressure. The conservative war mongers who believe that every foreign dust up requires the Marines to invade are delusional and dangerous. This is a time for collective composure and strategic thinking, not panicky overreactions. And our nation is fortunate that people like Pirro and McCain aren’t in positions of power where they could act on their bad judgment.

6 thoughts on “American Expect-ionalism: Why Is Every World Crisis America’s Responsibility?”