You can’t make this stuff up, folks. Well, unless you are an acutely delusional Tea Party Republican or work for the wingnutty press. In that case you can’t help but make up crap like this. It’s in your DNA. 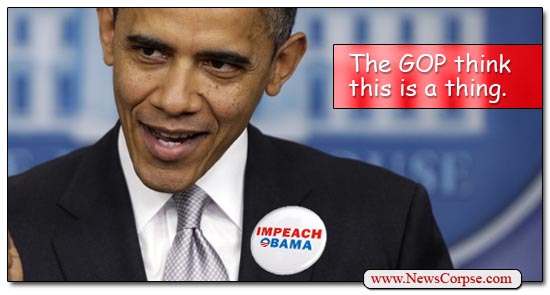 Ever since the first inauguration of President Obama, right-wingers have been trying to undo the people’s decision to make him America’s chief executive. They declared that their top legislative objective was to make Obama a one-term president. In pursuit of that goal they have blocked most of his policy initiatives, judges, and government reforms. At the same time they have been hyper investigatory on everything from Fast and Furious, to the IRS, to ObamaCare, to his birthplace. All of this was squarely aimed at crippling or revoking his presidency.

This year Obama’s critics came out of the impeachment closet and began openly advocating for that legal nuclear option despite not having any legal basis for it. While many Tea-Publican whack jobs were earlier to the gate, Sarah Palin burst onto the scene a couple weeks ago with her own demand that Congress do their duty and trump up some phony articles of impeachment. It got so absurdly intense that Obama addressed it himself with fitting mockery.

So of course the next shoe to drop in this melodrama is that, along with everything else in the world, Obama is to blame for this too. In fact, according to some in the rightist crackpot community, it was all part of his nefarious plot to embarrass the GOP. Here is what Texas Republican Steve Stockman had to say about it when interviewed by the ultra-fringe rightists at WorldNetDaily:

“President Obama is begging to be impeached. […] He wants us to impeach him now, before the midterm election because his senior advisers believe that is the only chance the Democratic Party has to avoid a major electoral defeat. Evidently Obama believes impeachment could motivate the Democratic Party base to come out and vote.”

There you have it. The evil genius in the White House orchestrated the whole Obama-hate campaign from its earliest days in 2008 just so that he would be able to use impeachment, which is every president’s dream, as an election strategy six years into his presidency. He had the foresight to anticipate that his anti-America agenda, developed in concert with the Muslims and Marxists in his inner circle, would make the 2014 midterms so difficult that he would need something positive, like having himself prosecuted before Congress for high crimes and misdemeanors, in order to stem the tide of opposition that would rise up.

And Rep. Stockman is not alone in seeing through Obama’s scheme to impeach himself. Rush Limbaugh caught on and told his dittoheads that…

“[Obama] is really trying to goad the House Republicans into impeaching him. Really trying, I mean, very hard. It’s become obvious. It’s so obvious, he’s not fooling anybody.”

Indeed. He certainly isn’t fooling Steve Scalise, the new GOP Whip in the House of Representatives. Scalise was interviewed on Fox News Sunday by Chris Wallace who repeatedly sought to make Scalise commit to whether or not Republicans would advance impeachment. The best that Wallace could extract from Scalise was that…

“[This] might be the first White House in history trying to start the narrative of impeaching their own president.”

What’s fascinating about Scalise’s criticism is that, despite trying to blame the impeachment talk on Obama, he flatly refused to take it off the table. This is, in fact, consistent with all the other impeach-truthers. They accuse Obama of being the source of the attacks, while simultaneously keeping the controversy alive. It’s like accusing a firefighter of being an arsonist while you’re hiding in the bushes with a lighter and a pile of dry twigs. And speaking of fire-starters, Glenn Beck weighed in on this too.

“The president is going to change the subject and he’s going to make it about impeachment. […] So who wants it? The president does, because then he’ll be able to say ‘I demand justice.'”

[Update] This evening Megyn Kelly joined the Obama Self-Impeachment Loons with a segment devoted solely to her theory that the President and Democrats really want impeachment hearings to proceed. She introduced the segment by saying that there has been “a drumbeat of impeachment talk from the Democrats.” Like her fellow screw-loosers, she appears to be oblivious to the long record of conservatives who have been fanning these flames, including Allen West, Mark Levin, and even her Fox colleagues Jeanine Pirro and Andrew Napolitano. Kelly’s guest was Fox regular Chris Stirewalt who absurdly claimed Obama was “trolling the other party in hopes that they will impeach you.” And Kelly herself recently interviewed Andrew McCarthy, author of the new book “Faithless Execution: Building The Political Case For Obama’s Impeachment.” Has she forgotten already?

At one point in the segment Kelly sought to prove that Republicans had no incentive to push impeachment because a Fox News poll showed that 61% of all respondents were opposed to it. What Kelly conspicuously left out, even though she had prepared on-screen graphics, was that the same poll showed that 56% of Republicans say they support impeaching the President. And a whopping 68% of the Tea Party favor impeachment. That could be a significant partisan incentive. Now why do you suppose Kelly failed to divulge that data from her own poll?

It seems that whenever conservative blowhards get tired of defending their irresponsible overreaching into fruitcake-ville, they downshift to try to pretend that they never held those psycho positions in the first place. Then they attempt to blame the victim (Obama) for the whole messy affair. They did this recently when the birther foolishness was making them look even more dimwitted than usual. So they alleged that it was Obama who was the only one talking about his birth certificate. Yeah, that’s the ticket.

This is behavior that is familiar from the lunatics in the Republican Party. They can’t seem to make any arguments that don’t contradict reality. They accuse Obama of being a socialist, even though capitalism has thrived during his term (record corporate profits, stock market soaring, unemployment down). They fret over his fiscal irresponsibility without noticing that he cut the deficit in half. They complain about the vacation time attributed to him, which is far less than his predecessors. They’re suing him for executive overreach, apparently unaware that he has issued fewer executive orders than any president in nearly a hundred years.

This a president who is seen by his foes as both a lazy, incompetent, bungler, and a brilliant, determined, tyrant. They bitterly complain that he is disengaged and not doing enough – of the things that they hate him for doing so relentlessly. And now they are trying to peddle the notion that all along impeachment was a part of his grand plan to steal the 2014 elections. At what point can we have these nut cases put on a psychiatric hold for observation? Seriously, they need help.

7 thoughts on “CONSPIRACY: President Obama Is Trying To Impeach Himself”