For those of you who have had enough of Sarah Palin pontificating for free on everything from sanctimonious piety to impeaching President Obama, your prayers have been answered. Now, rather than getting updates from her Facebook page or having to watch Fox News, you can subscribe to her Internet video service and pay $9.95 per month for all the word-salad gloriousness you used to have to suffer through free of charge. 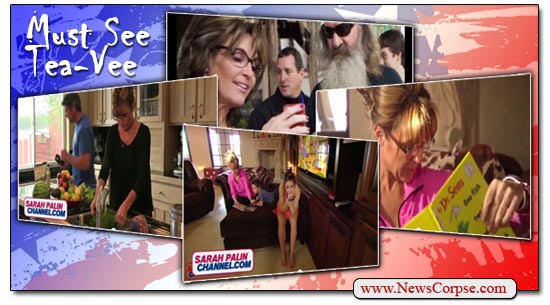 Palin introduces her vlog with a video (posted below) that reeks of the grifter-mania that has characterized her rise from half-term governor to VP candidate loser to Impeachy Keen, reality TV’s heroine and unintentional comedienne. Obviously she has been coveting the filthy lucre being dredged by Glenn Beck and is determined to cash in for herself.

She promises to deliver a broad array of mavericky goodness on her “news channel that really is a lot more than news.” And she’ll do this by “talk[ing] to you directly on our channel, on my terms.” You know that she will honor her pledge to “go beyond the sound bites and cut through the media’s politically correct filter” because you’ve seen her prior work that is a jumble of catch phrases, cliches, and wingnut platitudes. But most of all you can breathlessly anticipate those personal moments in the hearth of the Palin homestead.

Palin: We’ll also share some of the fun that goes on in the Palin household and a lot of our adventures in the great outdoors trying to get us from point A to point B and, believe me, it is fun because it’s real life.

Believe her. Because nothing is more “real life” than an Internet video program produced by a hackneyed political agitator. And nothing is more fun than than hangin’ with the Duck Dynasty dudes and chopping veggies for moose stew. Stir in a batch of insipid analyses of national security, hateful rants at immigrant children, support for America’s plutocrats, and endless appeals for ever more oil drilling, and you have the makings of true must-see Tea-Vee.

And best of all, now you get to pay for it. Even though Palin will still be a featured Fox News contributor, and she will undoubtedly continue to post her lame Facebook updates, devoted fans can shell out cold, hard cash to get the very same junk opinions without the media filter that isn’t there anyway when she’s on Fox. Although, since she is too chickenshit to appear on any other news network, you have to wonder what media filters she is complaining about.

And speaking of shameless self-promotion…
Get Fox Nation vs. Reality. Available now at Amazon.

So congratulations, Sarah, on becoming a budding media mogul. Your commitment to fleecing your flock is unparalleled. And they will surely lap up every word you say as if it had any actual meaning, or your saying it had any impact on current events.

4 thoughts on “Must See Tea-Vee: Are You Ready (To Pay) For The Sarah Palin Channel?”