The news from around the world has been getting more intense with conflicts raging in Israel/Gaza, Syria/Iraq, and Ukraine/Russia. Not to mention an Ebola outbreak in West Africa and police shooting unarmed citizens here in the U.S. So that makes it the perfect time for a self-indulgent purveyor of puerile political pranks to post another in his series of odes to his own desperate cries for attention. 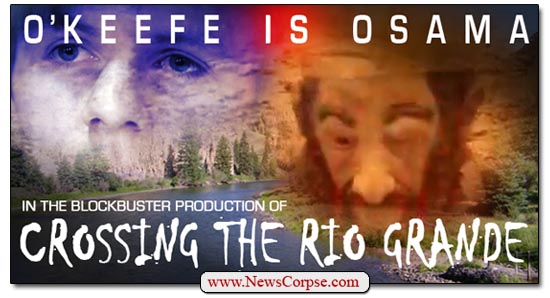 Abandoning his pimp persona, James O’Keefe ventured down to the U.S./Mexico border to prove that a lily-white American, in the company of a local Sheriff, could wade around in the ankle-deep waters of the Rio Grande unhindered. O’Keefe produced a video showing himself crossing what he said was the border, although with his track record it might have been a puddle at W’s old Crawford Ranch. O’Keefe repeatedly sought to build a melodrama around this desert hike by insinuating that the border was an open door to criminals and terrorists.

What he didn’t say was that there was a nearby road where U.S. Border Patrol agents keep watch on the very stretch of land that O’Keefe was prancing around. Nor did he think it was notable that the presence of an American citizen and his Sheriff companion might not peak the interest of the feds. Neither did he bother to inform his viewers of the resume for this particular Sheriff. Gawker, however, was generous enough to provide some background on him:

“Here are some fun facts you may not learn about [Sheriff Arvin] West from O’Keefe’s fawning video treatment: The sheriff is famous for arresting celebrities, from Willie Nelson to Fiona Apple, whose pot-filled tour buses use the nearby stretch of Interstate 10; he’s been found guilty of illegally arresting an El Paso police officer and violating his civil rights; and he has a reputation for being a right-wing and anti-immigrant media hound who calls President Obama ‘full of shit.'”

To add some extra punch to the production number, O’Keefe donned an Osama Bin Laden mask and repeated his crossing of the river. What made him think that the result would be any different by wearing an obviously phony Halloween accessory is anyone’s guess. Especially after having already established that there was no one monitoring the theatrics that he and his Sheriff sidekick were engaging in. And again, why would anyone be monitoring these two clowns? The Border Patrol have actual work to do.

As has become the norm, O’Keefe’s video was virtually ignored by the media who have become inured to his dishonest brand of faux journalism. The only outlets that continue to pay him any attention are the the most disreputable of the right-wing media circus, like Breitbart News, Newsmax, and the “Moonie” Washington Times. What must have been particularly painful for Jimmy was the reaction from ultra-conservative Fox News host Eric Bolling, who addressed the video on his program The Five and spoke directly to O’Keefe saying…

“What’s not helpful […] filmmaker James O’Keefe donning an Osama Bin Laden mask and crossing the Rio Grande. Shtick like that doesn’t work. We have honest-to-God serious problems with the border. O’Keefe, give it a rest, my man.”

O’Keefe is best known for making an ass of himself on video while imagining an acclaim that is shared by no one outside of the Tea Party Home for the Chronically Delusional. Some of his other recent antics have resulted in his arrest and conviction in a Louisiana senator’s office, a legal order to pay a $100,000 settlement to a former ACORN employee he defamed, and a sleazy plot to seduce a CNN reporter aboard his “Love Boat.” His last “Cinema Veri-tasteless” earned him a rebuke from a team of Special Prosecutors in Texas who officially concluded that his video “was little more than a canard and political disinformation.”

The ultimate goal of this project became apparent when a visit to his website revealed a reference to this video on his donations page where O’Keefe whined that “To complete this investigation, Project Veritas spent over $74,242 in legal fees, investigators salaries, and travel expenses.” He really does have a problem if it cost him 74 grand to hop a plane to Texas to stroll across a puddle with a pair of high-water jeans and a rubber Osama mask. With that kind of budget he could have hired a bearded Muslim actor and a couple of coyotes with a motor boat, added some pyrotechnics and a love interest, and entered it at Sundance.