Ever since President Obama crushed Mitt Romney in 2012 with 71% of the Latino vote, the Republican Party has made noises about broadening their base to include more minorities. For the most part their efforts have been limited to lip service, while their actions have served only to further alienate African-Americans and Latinos.

While most Democrats have risen to the aide of child immigrants who are suffering and alone on the southern border, Republicans have responded with insensitivity that ranges from calls to deport them, to formations of armed militias to – well who knows what they intend to do with their weapons aimed at frightened kids. In the end they are behaving consistently with the long-held positions of conservatives who have never welcomed either minorities or immigrants with open arms.

So leave it to the Koch brothers to come to their rescue with a clandestine campaign to bridge the ethnic gap that threatens to make the GOP a permanent minority party. The Republican regulars would be hard pressed to suddenly flip-flop on immigration and anger their Tea Party base that is dead-set against passing comprehensive immigration reform that respects the traditional values of America as expressed on the Statue of Liberty. They won’t even pass legislation to provide humanitarian relief for children. So any effort to bring Latinos into the GOP fold has to be done without leaving any fingerprints on the party’s standard bearers. 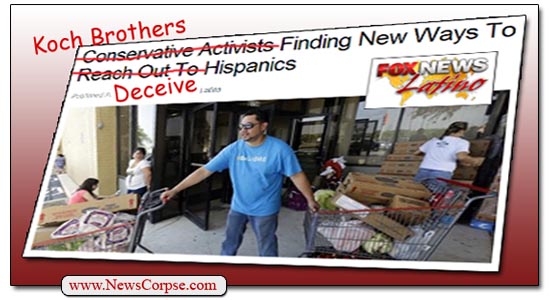 That’s where the Libre Initiative comes in. It is an ostensibly pro-Latino group that has begun offering English classes, health checkups and courses to help Spanish-speakers earn high school diplomas. The Associated Press, however, reports that it “has collected millions from the Kochs’ political network.” But its programs are served up with healthy doses of right-wing propaganda.

“Its organizers pitch conservative ideals while offering tutorials on U.S. immigration law, support for overhauling the broken immigration system that stops short of campaigning for the Senate’s bipartisan bill and collecting donations for the unaccompanied children crossing the United States-Mexico border illegally.

“In effect, it is a shadow GOP — one with a gentle emphasis on social services and assimilation over a central party often seen as hostile to immigrants and minorities.

The tactic is pure Koch Brothers. They were instrumental in creating the Tea Party, which they disguised as a “grassroots” organization despite the millions the Kochs poured into it. They created Generation Opportunity to make their fringe-right agenda appealing to young Americans. They recently donated $25 million to the United Negro College Fund, but rest assured, there are strings attached to that largess as well. The Koch brothers have a vast network of secretly bankrolled advocacy groups and think tanks that they use to advance their personal and business interests. The Center for American Progress published an extensive report cataloging their empire.

Conservative media is playing its part also. The AP story was posted to Fox News Latino, albeit with a very small link. However, there is no mention at all of the story on Fox News. That is commonplace for the Fox editors. They have a long history of trying to pander to Latinos on their Latino-focused website, while ignoring, or reporting the same story negatively, on the Fox News mothership. That way they don’t upset their regular (i.e. racist) viewers.