It was just four months ago that Fox News was covering the “second American revolution” at the ranch of tax-cheat Cliven Bundy. While the network was uniformly supportive of Bundy’s refusal to pay customary grazing fees, it was Sean Hannity who took the lead, featuring Bundy on his program numerous times, heralding him as a hero, and fiercely defending the militia movement’s embrace of armed opposition to law enforcement.

At that time, in the view of Hannity and other conservatives, it was the feds who were overstepping the bounds of decency and behaved like jackbooted thugs. To them it was the manifestation of a dictatorial state trampling on freedom and crushing liberty. Hannity milked the controversy for everything he could squeeze out in regular segments that he called “Government Gone Wild.” 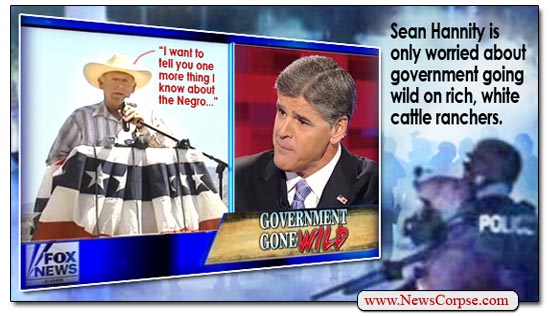 From the right-wing perspective, the government went wild when it responded to a flagrantly delinquent white man in the cattle business who wants to mooch off of federal lands for free. Bundy has a vested interest in this as he owes over a million dollars in fees. Then, when this businessman assembles a posse of armed militia members to confront the tax collector, Hannity and his ilk line up behind the law-breaker and whine about government overreach. Here’s Hannity to Karl Rove:

“Let’s start with the Cliven Bundy situation. All right, maybe he owes grazing fees money. Do you surround his property with snipers and shooters, sharp shooters and tasers and dogs and 200 agents? Is that the way to handle it?”

“No,” says an obedient Rove. After all, it’s just a measly million dollars in grazing fees. And for the record, the federal agents of the Bureau of Land Management did not arm themselves until after they were confronted by Bundy’s militia who swore to kill those who came to enforce the law.

Jump forward to today and it’s the people going wild. The government is now believed to be acting appropriately by shooting an unarmed teenager to death. And his only crime was an allegation (unconfirmed) that he pocketed a few cigars. Then militarized police confront justifiably angry citizens who have no personal stake in the matter other than to insure that justice is brought to bear.

The presence of urban tanks, assault weapons, riot gear, tear gas, and other aggressive means of crowd control, are not considered to be indicative of a government gone wild anymore. Is it because the victim in this case is a poor, black kid, rather than a well-to-do white rancher?

14 thoughts on “FLASHBACK: Sean Hannity Speaks Out Against A “Government Gone Wild””