The folks at Fox News are on the case of yet another scheme by super-villain George Soros who seems to be at the helm of every evil deed that Fox stumbles over. This time they have dispatched Brent Bozell, founder and president of the uber-rightist media watch-mongrel, Media Research Center (MRC), to pull the curtain aside on the Soros machine and reveal that he is the puppet master behind the indictment of Texas Governor Rick Perry. 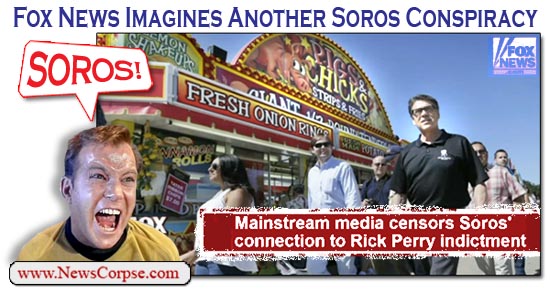 For more delusional nonsense from Fox News…
Get Fox Nation vs. Reality. Available now at Amazon.

Bozell’s op-ed for Fox News is titled “Mainstream media censors Soros’ connection to Rick Perry indictment.” He begins his bill of peculiars by alleging that the media has suppressed the truth about Texans for Public Justice (TPJ), the group that originally filed the complaint against Perry. Bozell claims that “the group responsible for that indictment had received a half million dollars” from Soros. However, there is a very good reason that the press failed to disclose this information: It isn’t true.

First of all, TPJ is not responsible for the indictment. They merely filed a complaint that would have been dismissed if it were without merit. It was the Grand Jury, impaneled by a Republican prosecutor who was appointed by a Republican judge, that brought the indictment. As usual, if Republicans are alleged to have broken a law it is always the fault of Democrats. That includes GOP governors Perry, Chris Christy, Scott Walker, Bob McDonnell, and Rick Scott. Detect a pattern there?

Secondly, TPJ never received $500,000 from George Soros. Since Bozell failed to cite his source for that allegation, I had to track it down myself. As it turns out it was reported by the Business & Media Institute (BMI), which just happens to be a division of Bozell’s MRC. Fancy that. BMI describes their mission as being “devoted solely to analyzing and exposing the anti-free enterprise culture of the media.” Searching further I did find a $500,000 donation from the Open Society Institute, which was founded by Soros, to a coalition of groups that came together to ensure that stimulus funds were well spent. From their press release…

OK then, TPJ was the beneficiary of some amount of largess from Soros, but certainly not half a million dollars. Even if the donation was divided evenly among the members (unlikely because groups like the Sierra Club and Public Citizen are so much larger than TPJ), it would have amounted to only $62,500. It was intentionally dishonest for Bozell to imply that TPJ received the whole amount. Another detail that he left out was that this donation was made five years ago (November 2009). That was long before TPJ had filed its complaint against Perry and even before any of the issues cited in the complaint had occurred.

No objective person could conclude that an organization that received a small portion of a donation five years prior was still beholden to that donor. But Bozell implausibly proclaims that he “wasn’t in the least bit surprised to learn the Soros machine’s fingerprints were all over this brazen, partisan ploy. It’s what they do.” How Soros’ fingerprints got all over an event that took place many years after he made a donation can only be attributed to his well-known omnipotence and clairvoyant powers. Either that or Bozell’s well-known paranoia and aversion to the truth.

Bozell closed by saying that “In this case, the media have gone beyond mere bias and are complicit in the Soros machine’s scheme to take down a conservative leader.” And with that he comes full circle to branding the entire controversy as a Soros scheme. No longer is it a just a partisan ploy by democrats. Bozell has named the perpetrator and his accomplices in the media. And with the help of Fox News this delusional fabrication will become a fact in the minds of wingnuts across America.