The 2014 election cycle has produced some pretty horrific advertisements including Iowa Republican Joni Ernst’s tales of castrating hogs, the Club for Growth’s anti-Pryor (D-AR) ad featuring a pooping parrot, and even a Republican primary opponent of John Boehenr who crafted an “electile dysfunction” themed ad that said “If you have a Boehner lasting more than 21 years, seek immediate medical attention.” That one was actually pretty funny.

Now we have New Mexico Republican Allen Weh’s ad against incumbent Democratic senator Tom Udall (video below). Weh, the former chairman of the New Mexico Republican Party, has the distinction of being the first candidate grotesque enough to feature the ISIS executioner of American journalist Jim Foley in a campaign ad. However, sitting through the whole ad will reveal that Weh also includes a second shot of another execution before arriving at what must be his campaign theme: associating Sen. Udall himself with ISIS. 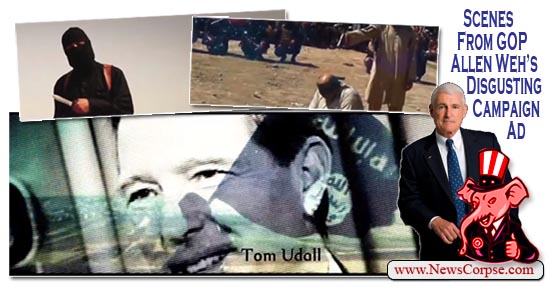 The visual message of compositing Udall’s face with an ISIS flag is a not-so-subtle implication that Udall is aligned with America’s enemies. And this is no accident. These ads are edited second-by-second to pack the entirety of the message into short clips. Weh’s operatives knew exactly what they were doing.

The audio on the ad is comprised almost entirely of a snippet from an Obama interview conducted before he was a candidate for president, and another repeated snippet of Udall saying “I know, as far as I feel, this diplomatic path that we’re on right now is a good one.” Udall’s comment was not sourced, but it turns it that it came from an interview on September 11, 2013 on CNN’s The Lead with Jake Tapper. It was also not place in context.

Weh’s ad sought to associate Udall with both ISIS and Obama, creating an ancillary connection between ISIS and Obama as well. However, Udall was responding to Tapper’s question about the speech Obama gave on September 10, 2013 regarding Syria’s chemical weapons. The President spoke about his determination to force Syria to abandon their chemical arsenal, his initial intention to seek authorization from Congress, and his ultimate decision to let the diplomatic efforts run their course.

“Over the last few days, we’ve seen some encouraging signs. In part because of the credible threat of U.S. military action, as well as constructive talks that I had with President Putin, the Russian government has indicated a willingness to join with the international community in pushing Assad to give up his chemical weapons. The Assad regime has now admitted that it has these weapons, and even said they’d join the Chemical Weapons Convention, which prohibits their use.

“It’s too early to tell whether this offer will succeed, and any agreement must verify that the Assad regime keeps its commitments. But this initiative has the potential to remove the threat of chemical weapons without the use of force, particularly because Russia is one of Assad’s strongest allies. I have, therefore, asked the leaders of Congress to postpone a vote to authorize the use of force while we pursue this diplomatic path.”

In context, Udall’s comments were in support of a process that eventually succeeded in collecting and neutralizing Syria’s chemical warfare capability that was already responsible for killing thousands of Syrians, including hundreds of children.

So Weh’s ad completely misrepresented Udall’s words, but the worst part was its blatant and nauseating exploitation of Foley, a victim of terrorist brutality less than a week ago. And compounding that repulsiveness, Weh plastered the flag of Foley’s murderers on Udall’s face. If there is an award for reprehensible defamation in political advertising, Weh is currently the runaway winner this year – so far.

5 thoughts on “Is This Ad For A GOP Senate Candidate The Worst Political Ad This Year?”