Thank you Sarah Palin. You have managed to poison the public discourse with an utterly insipid and dishonest notion that has attained a measure of immortality due to the persistent ignorance of your followers and the spinelessness of your Tea Party Republican comrades. 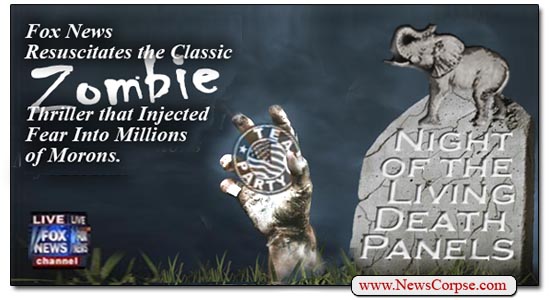 That’s right, folks. The Death Panels are baaack. And with no more legitimacy now than when they were first peddled by Palin (who actually stole the idea from wingnut Betsy McCaughey). Of course it is Fox News who is reprising this zombie lie which they had a substantial part in promoting the last time around. This year’s model is back in the news thanks to Fox Nation, the lie-riddled community website whose aversion to the truth is documented in the acclaimed ebook Fox Nation vs. Reality. Their story carries the tabloid-esque headline “Death Panels? Medicare May Start Covering ‘End-Of-Life Discussions’” That phony characterization is a long stretch from the New York Times article to which they link that doesn’t mention death panels in their headline at all: “Coverage for End-of-Life Talks Gaining Ground.” 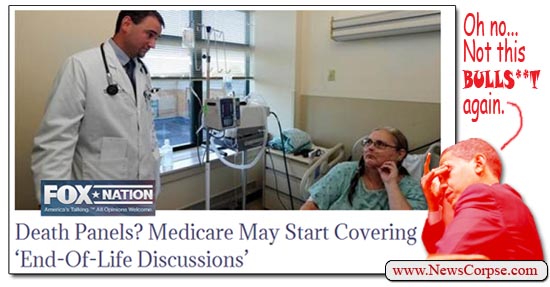 The news in this story is that, despite being jettisoned by a nervous Congress, coverage for end-of-life counseling is being taken up by insurance companies on their own as a result of prodding from doctors. That’s because it makes good sense and benefits the patient. It is not an economic issue because, depending on the patient’s desires, health care may cost more (if the patient opts for every life-saving procedure available) or less (if the patient chooses to forego artificial methods of sustaining life).

From the beginning, the death panel term was a perversion of what the actual policy provided. It merely stipulated insurance coverage for voluntary discussions between the patient and the doctor to determine the patient’s wishes in the event of a catastrophic illness. Most medical professionals recommend this because, after an illness strikes, you may not be able to make your preferences known. That leaves it to either the doctors or traumatized family members who often disagree. But the completion of an “Advance Directive” always represents your wishes and never imposes any medical care, or lack of it, on the patient.

Tea Party nut cases took the position that you should not be able to have your insurance cover the preparation of such a directive in consultation with your doctor. They irrationally feared that “end-of-life counseling” was coded language that, when translated by enlightened wingnuts, meant “plotting to kill you.” It’s too bad that such stupidity isn’t covered under ObamaCare. And even though some right-wingers recognized that their misrepresentation of end-of-life counseling was making them look ridiculous, when they adjusted their rhetoric they just switched to a different policy, the Independent Payment Advisory Board, and called that a death panel. They were still wrong. The IPAB was a doctor-run advisory group tasked with identifying the best practices in health care to insure the best outcomes and to avoid unnecessary or exploitative procedures.

When the ultra-conservative National Review agrees that “Insuring End-of-Life Talk [is] Not Death Panels,” then the distance Fox News has traveled from reality becomes ever more clear. They simply don’t care about honestly dispensing information, even when people’s lives depend upon it. And they persist with their campaigns of disinformation even after other conservative outlets have abandoned them.

4 thoughts on “Fox Nation vs. Reality: Night Of The Living Death Panels”